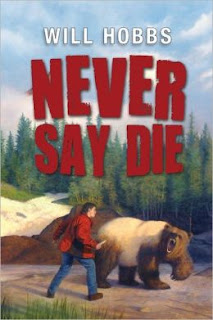 For much of the history of children's literature, there's been a thriving subgenre of adventure novels in which the main character is an older teen or an adult, even though the intended audience is somewhat younger. From The Swiss Family Robinson (1812) and Kidnapped (1886), and on to such Newbery winners as The Dark Frigate (the 1924 medalist), Rifles for Watie (the 1958 champion), and Island of the Blue Dolphins (1961's selection) it's a niche with a rich past.

It's not, however, all that common of a subgenre today, which I think is related to the meteoric rise in the last couple decades of YA publishing. Recent adventure novels with older protagonists tend to include the kind of more mature themes that mark them as designed for an adolescent or post-adolescent audience (see, for instance, Geraldine McCaughrean's brilliant 2008 Printz winner, The White Darkness).

Will Hobbs, however, is kind of a throwback author in that sense, and Never Say Die is very much a throwback book. Despite the fact that its protagonist, Nick Thrasher, is fifteen, the publisher's suggested age range for the novel is 8-12, and as I was reading it, that seemed about right to me. The plot involves Nick and his much older half-brother Ryan's travels through the incredibly remote Ivvavik National Park in Canada's Yukon Territory. Ryan is a wildlife photographer and writer, and he's hoping to produce an article for National Geographic about climate change in the far north. Nick, who is half Inuit, is hoping to use the trip as an opportunity to get to know the brother he's never before met -- as well as to see the massive herds of caribou from his grandfather's stories. However, the trip is fraught with peril, perhaps best personified by the deadly "grolar bear" -- a freakish, aggresive polar/grizzly hybrid.

Although, in addition to the high-octane adventure, there are some weighty issues at hand (global warming, family tension, the struggle between Inuit and white culture), they're all dealt with in a way that's much more middle-grade than YA. Older readers may well enjoy Nick and Ryan's adventures -- I certainly did -- but Never Say Die isn't necessarily directed at them.

Despite having showed up on the Best Books for Young Adults list on seven occasions (most recently for his 1999 novel Jason's Gold), Will Hobbs hasn't ever been recognized by the Newbery or Printz committees. I don't think Never Say Die will be either -- the exposition dumps in the dialogue are too obvious, and the prose, while effective, isn't particularly "artistic." However, it's a grand adventure, and I hope it finds a wide audience.


Published in February by HarperCollins Children's
Posted by Sam Eddington at 11:36 AM