The Winner's Circle: Bud, Not Buddy, by Christopher Paul Curtis (2000) 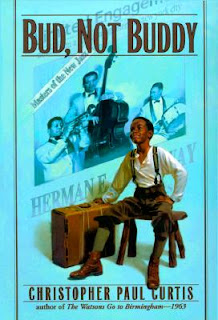 Ten-year-old Bud Caldwell isn't in the best of circumstances as Bud, Not Buddy opens. His mother is dead, all of his possessions fit into a single suitcase, and he's being shipped off to yet another foster home during the heart of the Great Depression. But after things at the foster home go very wrong, Bud sets off on his own to find the father he's never known, with little to help him other than a faded flyer for a band: Herman E. Calloway and the Dusky Devastators of the Depression!!!!!!

So begins one of the modern classics of children's literature. Bud's adventures bring him into contact with a whole host of some of the best-realized characters in any children's book I've ever read. From the loathsome Todd Amos, to the jovial Lefty Lewis, and on to the enigmatic Herman E. Calloway himself, each one of them seems fully real, with personalities that extend far beyond the boundaries of the pages. Indeed, the characters are so impressively developed that Christopher Paul Curtis was later able to spin an entire novel around a minor character, Deza Malone, whose whole appearance in Bud, Not Buddy barely spans eleven pages.

The tone of Bud, Not Buddy is also truly exceptional. It's a story full of deep sadness, albeit laced with real hope -- and yet it's also very, very funny. Bud is the kind of child who's learned to laugh in order to keep from crying, and his witticisms and sharp observations buoy the novel even in its darkest moments. It's extremely difficult to balance humor and pathos, and I'm hard-pressed to think of another children's book that does it better.

With over a decade's worth of hindsight, Bud, Not Buddy appears to be an example of the Newbery committee making an unassailable choice. There were three Honor books in 2000: Getting Near to Baby, by Audrey Couloumbis; Our Only May Amelia, by Jennifer L. Holm; and 26 Fairmount Avenue, by Tommie dePaola. In most other years, Holm probably would have won the Newbery, but even as well-regarded as Our Only May Amelia remains, I haven't really heard anyone argue that it was unfairly passed over. Bud, Not Buddy also won the Coretta Scott King that year, and that too is an award with almost no complaints.

Although his list of published works isn't particularly long, Christopher Paul Curtis is unquestionably a major author. In addition to his Newbery medal, he also has two Honors, for The Watsons Go to Birmingham - 1963 (1996 Honor), and Elijah of Buxton (2008 Honor); Elijah also won the Coretta Scott King, the Scott O'Dell, and the Canadian Library Association's Book of the Year for Children. But Bud, Not Buddy is still the cornerstone of Curtis's reputation, and a rock-solid one it is.
Posted by Sam Eddington at 10:23 AM