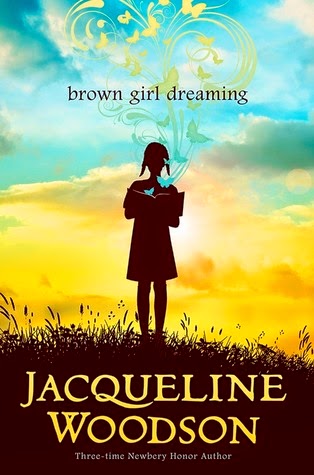 Brown Girl Dreaming is a memoir of Jacqueline Woodson's childhood, told in a sequence of poems. It begins at her birth in Ohio, covers her move to South Carolina, and another, later move to Brooklyn. The time period coincides with the heart of the Civil Rights Movement, and the tensions between Black and White, North and South, Secular and Sacred, and Old and New are notes that repeat in different combinations as the book moves forward.

What Brown Girl Dreaming does well, it does very well. Woodson's eye for arresting detail is on full display here -- the color of the dirt, the sound of playground rhymes, the taste of lemon chiffon ice cream. Her personal voice too is very strong; throughout the book, I had a firm sense of just who Woodson was as a child. The other characters are also well-drawn and described. Everyone in the book felt real, something that not even all memoirs accomplish.

I was less sold on the technical aspects of the book. Many of the more personal moments were in beautiful poetry, but the political aspects -- and, oddly enough, the parts about Woodson discovering her desire to become a writer -- felt prosy and a bit shopworn, hitting themes that have come up over and over again in children's literature of the past decade without seeming to add a particularly fresh perspective. Similarly, sometimes the line breaks worked marvelously, but sometimes I felt like they were inserted simply because the line was getting too long. And I'd echo the complaint that came up in discussions over at Heavy Medal, that the titles on the individual poems interrupt the flow of the book without adding much thematically or tonally.


Each individual poem is a sort of a vignette, and I'm unconvinced that this kaleidoscope approach works --- too many of them don't work to advance the narrative, which led me to question the editing. However, this was also a complaint that I had about No Crystal Stair, and most readers didn't agree with me then, so my opinion should perhaps be taken with a grain of salt.

Actually, No Crystal Stair isn't a bad point of comparison in general for Brown Girl Dreaming. BGD is being touted in many circles as the Newbery front-runner, and No Crystal Stair was also a highly-reviewed book (and one that ended up winning the Boston Globe-Horn Book award). I didn't like either of them nearly as much as the general consensus, and in both cases, my main criticisms were structural. It may simply be the case that, as with that previous title, I'm not necessarily the right reader for the book, and so my review shouldn't be given all that much weight.

Because the critical consensus for Brown Girl Dreaming has been so overwhelmingly positive, it's likely this will be one of the titles we choose for our Maryland Mock Newbery. I'm excited to hear the discussions about it, and I hope that listening to and participating in those discussions will help me further refine my opinions of this title.