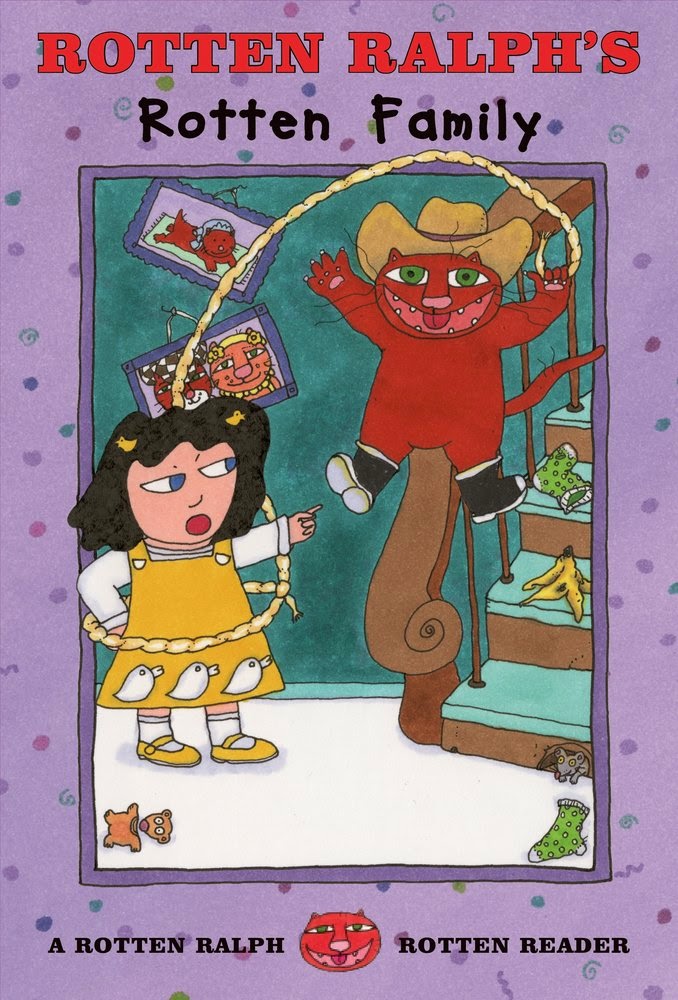 Being as Newbery-focused as we are around For Those About To Mock, we tend to think of Jack Gantos for Joey Pigza and the Norvelt books. However, Gantos started his career as a picture book author, and he's returned to Rotten Ralph time and time again for almost four decades now.

As is true of many popular picture book series, Ralph's later adventures have expanded to easy readers. In Rotten Ralph's Rotten Family, a suddenly introspective Ralph returns to his childhood home and family to try and discover the root of his rottenness. His memories of his younger years are decidedly rose-colored, but he quickly discovers that they may not be altogether accurate.

It's somehow fitting that, with Gantos at the helm, a lighthearted tale about a mischievous feline quickly takes a sharp turn into Cat Hands On Misery To Cat. The story has a moral, but that moral (essentially, "it's possible to rise above one's abusive childhood") is both highly unusual and abnormally dark in a genre that's pitched to six-year-olds. That it works at all is a testament to Gantos's dexterity and skill as a writer. Still, anyone who thought that the dream sequence in Penny and Her Marble was a bit bleak is probably going to be horrified by Rotten Ralph's Rotten Family.

What makes Gantos great, however, is his ability to blend the surreal and the all-too-real into a concoction that goes down smoothly despite lacking any excess sugar at all -- sort of like Roald Dahl if Dahl viewed humanity with affection instead of detestation. As such, Gantos fans will likely find Rotten Family right up their alley. I think it's too left-field to win the Geisel, much less the Newbery, but it's not as if Gantos needs any more awards for his books to find the readers that they deserve.


Published in March by Farrar Straus Giroux
Posted by Sam Eddington at 9:40 AM