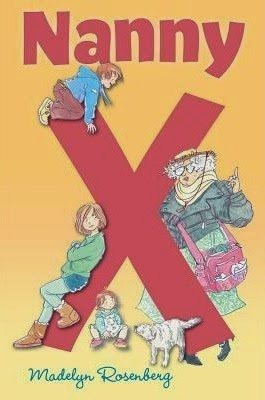 Alison Pringle and her younger brother Jake aren't very excited that their mother is going back to work. They're definitely not excited to be getting a nanny, especially one who insists on being called Nanny X, and who sends them to school with peanut butter and anchovy sandwiches.

However, Alison and Jake are in for a surprise when, after a save-the-park meeting goes bad, they discover that Nanny X actually works for the legendary N.A.P -- the Nanny Action Patrol. Now the three of them, plus Alison and Jake's baby sister Eliza and their dog Yeti, must stop a dastardly undercover crime ring that threatens their friends, their town, and possibly even their lives.

Madelyn Rosenberg's previous book was 2013's Canary in the Coal Mine. I liked that book, but I loved Nanny X. It's a rollicking, funny novel that, at a brief 112 pages, doesn't overstay its welcome. It's the kind of thing that I loved when I was a child, and I think it would be an easy sell to kids who like mysteries, adventure, and/or self-aware humor.

Historically, the Newbery is highly resistant to humorous books, and even recent winners with a high comedy factor (think Dead End in Norvelt or Flora & Ulysses) have had a level of thematic complexity that Nanny X doesn't attempt. Essentially, Nanny X is the kidlit equivalent of a really good popcorn flick -- one that won't win any Oscars, but that will be enjoyed by (hopefully) many people. And, even though we pay so much attention to awards here, that's a worthy achievement in and of itself.


Published in August by Holiday House
Posted by Sam Eddington at 3:22 PM