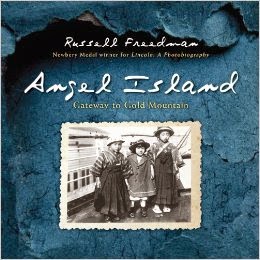 Almost everyone in the United States knows at least something about Ellis Island, the gateway for immigrants arriving from Europe. However, Ellis Island's Pacific counterpart, Angel Island, remains much more obscure. I know I couldn't have told you anything about it before reading Angel Island.

There's a certain assurance of quality that comes with Russell Freedman's name, and Angel Island more than lives up to expectations. Freedman details the racism and onerous legal restrictions that faced immigrants from China, Japan, Korea, and elsewhere in Asia, with many references to primary accounts. Scattered throughout the book are a number of achingly sad poems -- mostly anonymous pieces that were written on the walls of the Angel Island detention barracks. They're a heart-rending window into a troubled part of America's past.

The archival photographs that accompany the text, though they're outside the Newbery criteria, are excellent and well-chosen. Freedman's author's notes and acknowledgments also provide insight into the work process of one of America's foremost children's authors. It's a really well-designed book, and both Freedman and his publisher, Clarion Books (Houghton Mifflin Harcourt), should be proud.

Despite the fact that Angel Island is an excellent book (for my money, a superior title to Freedman's previous effort, last year's Becoming Ben Franklin, and the equal of the one before that, Abraham Lincoln & Frederick Douglass), I'm not sanguine about its Newbery chances. Although the Newbery guidelines are essentially genre-neutral, the last year that more than one nonfiction book (leaving out poetry and folklore) was honored was 1951. My library hold for Brown Girl Dreaming, Jacqueline Woodson's verse memoir, hasn't yet been filled, but it has five starred reviews that I've seen, and the other early critical opinions are uniformly brilliant, with many reviewers naming it as the Newbery front-runner. I'm not sure that Angel Island is enough of a standout to beat that, and, to go back to books I've actually read, I'm also not sure it's superior to A Woman in the House (And Senate). Freedman might conceivably be able to add another Sibert Honor to his crowded awards shelf, but that's as high as I'm willing to project for it. I would, however, consider it a must-purchase title, and a worthy addition to what's possibly the most impressive corpus of work in the history of American children's nonfiction.


Publication in October by Clarion Books / Houghton Mifflin Harcourt
Posted by Sam Eddington at 8:35 AM