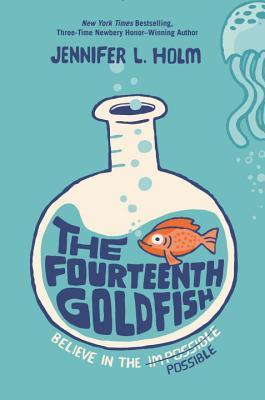 Science is having a big moment right now. We effing love it! STEM is everywhere (I refuse to add the "a," because Science Technology Engineering Arts and Math is just shorthand for "everything.") Neil deGrasse Tyson is a rock star (of course, my own child has grown so tired of him that she refers to him as Neil deGrasse Buttcheek, but I digress).

In that context, it's a great time for a book like The Fourteenth Goldfish to come along - a book that not only celebrates science as a discipline, but also delves into some interesting questions about scientific ethics.

Ellie has just entered the sixth grade, and big changes are in store. Her former best friend has drifted away into volleyball, her babysitter has quit, and her mother has brought a teenage boy home to live with them. Not just any teenager boy, though: Ellie's scientist grandfather, who has managed to reverse his own aging process with the help of a rare jellyfish. Grandpa/Melvin enrolls in school along with Ellie, and as she teaches him how to navigate sixth grade, he introduces her to the world of science.

Jenni Holm's prose is so buoyant that I was surprised, when I finished the novel, to realize what weighty themes she had addressed. Early on, Ellie learns about some famous scientists - most notably Jonas Salk, Robert Oppenheimer, and Marie Curie. As the plot advances, the dilemmas faced by these figures help to frame the moral decisions that Ellie and Melvin must confront. The "fourteenth goldfish" of the title initially seems like a pointless detour, but by the time Holm reintroduces it at the end of the book, it feels both surprising and inevitable.


It's very satisfying. I love a good ending.

There are some great characters too - teenage grandpa Melvin is a great invention, and supporting characters like Ellie's new friend Raj are vivid as well.

The novel is not without its flaws. Ellie's drama teacher mom is a bit much - I used to be a drama nerd, and my directors never raided the costume closet for their daily attire. And some of Ellie's internal philosophizing feels heavy-handed and ultimately unnecessary, given the way the plot reinforces the themes on its own.

I'm not really sure about the Newbery chances of The Fourteenth Goldfish... It feels, in some ways, similar to Flora and Ulysses, which I thought was too light and quirky to win consensus, and I was wrong on that count. In any case, it's a great title to hand to fans of Cosmos, or to tie in with a STEM (not STEAM!) unit.