2015 Contenders: The Madman of Piney Woods, by Christopher Paul Curtis 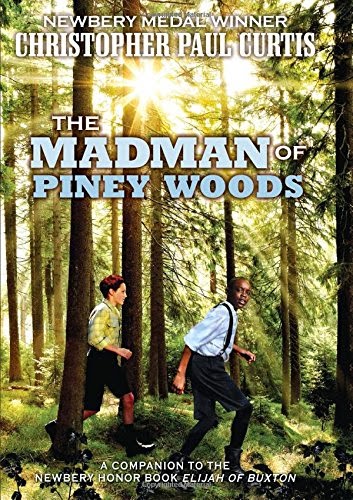 The Madman of Piney Woods comes billed prominently as "A companion to the Newbery Honor book Elijah of Buxton." Elijah, however, remains a hole in my children's literature reading -- it came out when I was working in the adult department, and I've just never gone back to read it -- and so I encountered Madman as an independent work.

In fairness, Madman is set decades later than Elijah, and simply happens to use some of the characters in the earlier work as (relatively) minor figures. The main story arc follows Benji Alston, a black boy who dreams of becoming a newspaper reporter, and Red Stockard, an Irish-Canadian boy who wants to be a scientist. Both of them have encountered a mysterious man who lives out in the woods, and both are trying to find their own places in their families, communities, and beyond.

When Rachael and I were talking about Christopher Paul Curtis's last "companion novel," The Mighty Miss Malone, she mentioned that the prose was consistently high-quality, but the book didn't really hang together fully as a novel. Any individual page is wonderful, but it's less than the sum of its parts. That's exactly the feeling I had reading The Madman of Piney Woods. It's a series of beautiful paragraphs that doesn't really produce a successful book.

One of the difficulties I had with Madman is the way it's constructed. It's told in alternating first-person narration; however, it's not until page 197 of my ARC that the two narratives intersect. Up until that point, it basically felt like reading two separate novels, and many of those early chapters have only minimal impact on what turns out to be the main plot. The prose was engaging enough to keep me reading, but the lack of interplay between the narratives and the sluggishness of the pacing was troubling. Additionally, some of the minor characters seemed to exist simply as plot devices -- Mr. Bennett is the worst offender here, but he's by no means the only one.

But really, I guess my biggest problem with Madman is that it didn't seem to contain a story that needed to be told. In Curtis's best work, this isn't an issue -- Bud, Not Buddy, for instance, is centered around a well-developed character, Bud, who has a real and pressing problem, finding his father. Although many of the characters in Madman claim to have deep and abiding wants and struggles, those urges seem to get lost on their way to the page.

I don't feel any hesitation in saying the Christopher Paul Curtis is one of the four or five most important American children's authors still writing. I do note, however, that this is his third consecutive book that's a companion or sequel (after Mr. Chickee's Messy Mission and The Mighty Miss Malone), and he hasn't published a fully original novel since 2007. I hope that he returns to the inventiveness and brilliance of his peak work, because we need his voice. The Madman of Piney Woods, however, is a second-tier book from a first-tier author, and I don't think the Newbery committee will decide to honor it.


Publication in September by Scholastic.
Posted by Sam Eddington at 10:00 AM