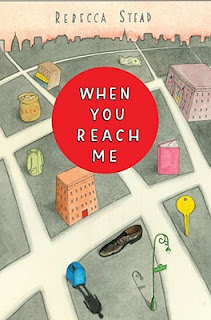 There's a statement that I've seen attributed to W.B. Yeats, in which he likens the ending of a poem to the lid of a box clicking shut. That's an aspirational statement for poetry, and it's something that is even rarer in prose. I would argue that that sort of perfect coming together of all the elements in the plot isn't necessary for a novel to succeed -- Breadcrumbs is a recent example of a book that I'd say fully succeeds despite doing precisely the opposite -- but when it happens, it's a magic thing.

And, oh, does it ever happen in When You Reach Me, Rebecca Stead's novel that lapped the field and took the 2010 Newbery. So many elements come into play during the first part of the book -- mysterious notes, changing friendships, the main character Miranda's obsession with A Wrinkle in Time, Miranda's mother's intense preparation for her appearance on The $20,000 Pyramid, the crazy man on the corner, and a first job for Miranda and two of her friends are just a few of them. And then, in the last 40 pages, they all come together, in a whirlwind confluence of clues that left me, as an adult reader sitting in my apartment on my loveseat, almost gasping for breath. The plotting in this book is stunning, not just for a children's book, but for a book, period.

Not that every question is completely answered, mind you. There are glimpses of a future world that are left unexplained -- which is perfectly understandable, given that no one in the book is in a position to explain them. But these hints of the universe outside the confines of the novel aren't unnecessary to the plot, and they add atmosphere and tension to Miranda's struggle to understand the events unfolding around and through her.

The other elements of the book are also well done; the characters are well-developed and easy to identify with, and the New York City setting is clearly and vividly drawn. But I keep coming back to the stunning plotting. I don't usually do that -- I know that as a reader, I'm drawn to character and description rather than plot. But it's such an outstanding feature of When You Reach Me that I think it deserves special note.

It's my goal to read all of the Newbery books (not there yet, but making progress) and to write about each of them here (two down, 89 to go). Some of them are controversial, some haven't held up all that well, and some just aren't that well known anymore. But none of those things hold true about When You Reach Me. It's one of my favorite Newberys of all time, and one that I think best exemplifies the qualities of the award: it's not just an excellent children's book, but excellent literature, a novel that rewards close study and careful concentration while still being a gripping read. A classic, no question.
Posted by Sam Eddington at 10:40 AM