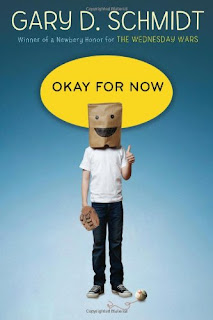 The Mayland Mock Newbery was last week, and in preparation for it, we read five books that have received some buzz for the medal. I adored one, loved one, liked one, thought one was okay, and genuinely disliked one, which isn't a bad spread as these things go.

The winner was Gary Schmidt's Okay for Now, which has been racking up a lot of wins in various other mock Newberys as well. It also happens to be the one I genuinely disliked, and though I'm in anything but the majority, I wanted to talk a little about my reaction.

We expect fictional universes to play by a set of rules. The rules can be as close to those of reality as the form of the fiction will allow; they can be utterly fantastic; they can even, as in much of Lewis Carroll, have the sense of being constantly shifting, controlled by something that never quite becomes visible. However, once the rules are set up, the author is generally obligated to play by them.

One of my two biggest complaints about this book was that it failed to play by its own rules. It sets itself up as a sort of children's novel version of a John Prine album, a more-or-less realistic tableau of abusive parents, wary neighbors, and sundry Vietnam-era unpleasantnesses. It ends as a sort of credulity-free daydream. Nothing that happens in the last 100 pages of the book should be able to happen, given the way the first 200 have framed the story, and as a reader, I found that intensely frustrating.

The other of my major complaints is that this is the sort of self-congratulatory story that people heavily invested in the arts tend to tell. As a librarian, (amateur) musician, and author (of no renown at all), I'm all about the transformative power of the arts. But in this book, a middle-school boy a) becomes an excellent artist by studying the works of John James Audubon under the tuition of a kindly librarian, b) finally learns to really read under the tuition of a kindly schoolteacher, c) has a successful Broadway debut under the tuition of a kindly if eccentric playwright, and d) ... but nevermind. One of these things would have been more than enough. Having all of them makes the book collapse under its own weight.

There's more, such as the ridiculous and unearned change in the father's heart during the last 20 pages of the book, the fact that Doug breaks through his brother's PTSD basically by giving him a stern talking-to, and the overwrought, soap-opera-style twist that the story with Lil takes. But the upshot is that there was not any point at the book in which I was not aware of the author pulling the strings behind the scenes -- and, for my money, getting most of them tangled up. I understand why people want so much to like this book, but if you look past the Art Can Make Everything Better stuff, what's left is a bewilderingly inconsistent hodgepodge, something that I don't think succeeds as a story at all, much less one that should get an award.

And that's my two cents.
Posted by Sam Eddington at 10:32 AM