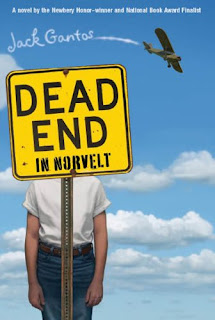 The first time I read Dead End in Norvelt, it was as pre-reading for the Maryland Mock Newbery. And, to be entirely honest, if I hadn't been reading it as preparation for an awards discussion, it might have been the last time I thought about it, either for better or for worse. It just didn't make that much of an impression on me, as a great book, a terrible book, or a not-quite-either but fascinating one. It was pleasant enough, but not a novel I'd return to.

But this seemed to be not a typical reaction to the book at all, and even less so now that it's won the 2012 Newbery Award. I've been rolling this over in my head, and it's brought two things to mind.

ONE: COMEDY IS HARD (to judge)

It seems to me there's much more variation in opinion regarding what makes good comedy than good tragedy. It's so much of a personal choice. Charlie Chaplin, Dennis Leary, Cathy, Robin Williams, South Park, Friends, Gary Larson, and SpongeBob Squarepants all were not only popular but critically acclaimed, but I defy you to find a single human being who enjoys them all.

Several of the librarians with whom I discussed Dead End in Norvelt at the Mock Newbery thought that it was one of the most hilarious things they'd read in ages; they were practically in tears while we were talking about it. I hardly laughed at all while reading it, but I'm very hesitant to say that was because it "wasn't funny." I didn't find it particularly funny, but that's not at all the same thing.

And this brings up an important point -- how is one to critically evaluate a book that's so dependent on the reader finding it funny? Maybe that's one reason the Newbery committee has historically shied away from humorous books. And if Dead End in Norvelt isn't exactly a Daniel Pinkwater book, it still depends more on humor than almost any Newbery book in recent memory. (I found parts of The Higher Power of Lucky [2007] quite amusing, but I'm unconvinced that there's been a Newbery winner that's at its heart even a gentle comedy since maybe Ginger Pye [1952].)  It may be that congratulations are in order for this year's committee for not being afraid of a book that tries to bring a smile to readers' faces, even if it's by nature not going to affect each reader equally.

TWO: ARE THE ANTIFREEZE COMMERCIALS RIGHT? (in that, when you peak, you win)

Something else that I think is worth considering is where the book that wins an author the Newbery (or Newberys, if you're one of the five authors who can say that) fits into their career. This divides roughly into three categories:

1) Authors for whom their Newbery-winning book is the unquestioned high point of their career. Madeline L'Engle wrote lots of other books, including several that were quite good, and even one (A Ring of Endless Light) that won an Honor, but I think there's little question that A Wrinkle in Time was her finest moment. Hendrik Willem van Loon wrote a plethora of other books, but none with the staying power of The Story of Mankind.

2) Authors where it isn't so clear cut, but their Newbery winner was definitely among their best work. Was Holes Louis Sachar's best book? There's an army of Sideways Stories From Wayside School fans who'll fight you about it, but at the very least, it's up there. Plenty of people prefer Stargirl, and Wringer won an Honor, but Maniac Magee is certainly on Jerry Spinelli's list of career highlights. Lois Lenski won two Honors and has supporters of many of her other books, but Strawberry Girl is definitely one of the best moments in her work.

3) Authors who won a Newbery for a book that was without question not their career high point. I read and liked Dear Mr. Henshaw as a kid, but Beverly Cleary wrote Henry Huggins, Ramona and Her Father, and Runaway Ralph. I think it likely that Avi will be remembered as the author of The True Confessions of Charlotte Doyle or The Good Dog rather than Crispin: The Cross of Lead. And I think your average reader would be surprised to find that, although Marguerite Henry did indeed win a Newbery Award, it was for King of the Wind, rather than Misty of Chincoteague.

An important addendum to number three is that sometimes this is dictated by the year of the Newbery win. To go back to Cleary's case, for example, Ramona and Her Father lost to Bridge to Terabithia in 1978. Bridge makes a lot of people's lists of the top 10 Newbery winners ever; it would have been an incredibly difficult book to beat. In 1984, the year of Dear Mr. Henshaw's victory, the closest competition was from The Sign of the Beaver, when Elizabeth George Speare already had two Newberys, and A Solitary Blue, when Cynthia Voigt had already won a Newbery the previous year for another book in the same series. Genius isn't equally distributed in time, and an author doesn't have any control over what else is published in a given year.

I wonder if it's possible that we'll view Gantos's career and the place of the Newbery Award within it as an example of the third category, if his lasting legacy will be built on Joey Pigza Loses Control (his Honor book in 2001, a crowded year that included not only the winner, A Year Down Yonder, but also Because of Winn-Dixie and The Wanderer) and Rotten Ralph, rather than on Dead End in Norvelt. There's certainly no shame in that, especially as he was an author whose possession of a legacy wasn't in question even before he took the Newbery.


A lot to think about, no doubt. But that's always the fun of the award! And now, there's another whole year in front of us, with more books to read and discussions to have!
Posted by Sam Eddington at 9:32 AM