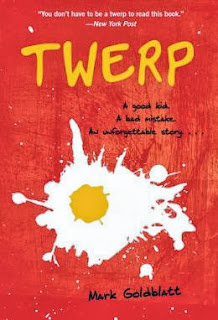 Aren't we supposed to be doing our Second Takes right now, you ask? Why yes, yes we are. But I already had this one on my desk, and now that I've finished reading it, I can't help but want to talk about it.

I have to confess that it took me a long time to get around to reading Twerp. We got an ARC of it ages ago, but neither Rachael nor I felt very enthusiastic about reading it. It wasn't until About To Mock reader Destinee tweeted to us that we should take a look at it that I retrieved it from the shelf, and it wasn't until I'd carried it around in my bag for three weeks or so that I even cracked the cover.

I think part of my reticence was that the language on the back cover of the ARC frames the novel as an anti-bullying message novel. My tepid feelings about Wonder weren't really a secret, and yet that was still one of the best books of its type that I've seen. This didn't seem like all that promising of a haystack to go needle-searching in.

Who knows, maybe the anti-bullying marketing will be successful in bringing Twerp some extra sales. However, the novel is much more complex than that. It's a detailed snapshot of New York City in the 1960s, a thoughtful examination of the awkwardness and fitfulness of first crushes, and an incisive look at what makes otherwise good people do terrible things. Although bullying certainly is a key theme, it's not even close to the only thing going on in the book.

I found the characters believable, especially Julian Twerski, the book's narrator. Also highly effective is the book's structure; it's set up as a lengthy writing assignment that Julian is doing for his sixth-grade English teacher. His teacher wants him to talk about the bullying incident that Julian was involved in, but Julian isn't that keen to discuss it. As a result, the book circles around and around, coming always closer, but never quite hitting the central plot point until the very end of the novel. It's an excellent way to keep the suspense up, and it doesn't -- to me at least -- feel inauthentic.

The end result is a surprisingly strong novel that deals honestly and truthfully with moral complications. Is it better than The Real Boy or Zebra Forest? I don't think it quite is, but it's very solidly in the next tier, and it's definitely worth consideration.


Published in May by Random House.
Posted by Sam Eddington at 9:02 AM