2014 Contenders: Africa is My Home, by Monica Edinger 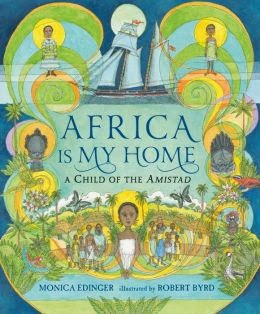 Full disclosure: the About to Mock ranch is very much a Monica Edinger fan club. We love her blog (if by some odd chance, you read us and not her, you should rectify that immediately), we eagerly devour her reviews in The Horn Book and The New York Times, and we're very grateful for her support in our own book discussion endeavors. We think she's awesome, and so I can't help but have that in my mind as I'm reading her work.

Africa is My Home is the fictionalized story of Sarah Margru Kinson, one of a handful of children who happened to be aboard the slave ship Amistad, of Supreme Court and Steven Spielberg fame. It follows her from her childhood in what is now Sierra Leone, through her experiences aboard the ship and in America, and on into her adult life. It's a fascinating read that sheds light on a little-known part of a famous story.

Indeed, though Africa is My Home is a short, heavily illustrated book with a single narrator, the book I was reminded of while reading it was No Crystal Stair. Both books discuss lesser-known figures involved in famous events, and interestingly, in both cases, the author attempted to write the book as straight nonfiction first before realizing that the paucity of firsthand data made that impossible.

I think Africa is the better of the two books, partly because it maintains its focus so well (which was my complaint about No Crystal Stair, though I was really the only one complaining, so take that for what it's worth). But Africa also breaks into poetry occasionally -- poetry that truly sings. Those passages are, in my opinion, the best part of the book, to the point that what I really want now is to read a book of Edinger's poetry. I'd put good money on it being awesome.

The one quibble I had with the book has to do with its being narrated in the first person by Sarah -- but a version of Sarah who is fully grown and looking back on the events of the narrative. This allows for the inclusion of facts and interpretations of events that a child wouldn't necessarily know or comprehend, but I felt like that temporal distance made the book lose some emotional immediacy. It's not a huge issue, but especially given that there's no such emotional gap in the poetic bits, it was something I noticed.

Although it can't be taken into account for Newbery purposes, this is also a truly beautiful-looking book. The illustrations are by Robert Byrd (Good Masters! Sweet Ladies!, Electric Ben), who captures the feel of 19th-century broadsides and maps while still imparting his signature style. It's a great pairing with the text, and the editors of the book should be commended for that.

The Newbery committee historically is very unfriendly to "picture books" -- even comparatively long ones with lots of text -- and if Africa were somehow to win, I think it might be the shortest winner since maybe Sarah, Plain and Tall (1986). That doesn't feel likely to me this year, but if Africa doesn't make the notables list, you'll definitely be able to color me surprised.*


*As a side note, it's worth noting that, although Byrd has illustrated both a Newbery winner and a Prinz honor book, he's never received any Caldecott love. I'm categorically not a Caldecott expert, but I'd really like to see Byrd recognized there.


Published in October by Candlewick

Posted by Sam Eddington at 2:33 PM