2014 Contenders: From Norvelt to Nowhere, by Jack Gantos 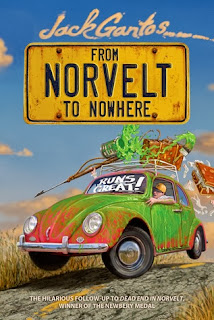 When last we left Jack Gantos (the character, not the author), the mystery of the murders of the Original Norvelters had been solved, his ever-bleeding nose had been repaired, and he'd even managed to talk some temporary sense into his father. However, once Jack's mother sends him on a trip to accompany the curmudgeonly Miss Volker to Eleanor Roosevelt's grave, everything rapidly deteriorates again. Jack and Miss Volker end up on a journey to Florida -- a journey filled with Classics Illustrated comic books, harpoons, and the vintage Gantos sense of an entire universe spiraling out of the control of a hapless, befuddled narrator.

The last book that Gantos (the author) wrote was, of course, Dead End in Norvelt, which took the 2012 Newbery. I actually think that Nowhere is a stronger book than Dead End -- it's funnier, more emotionally complex, and more thematically deep. There aren't too many sequels to Newbery books that manage to top the original, but I think Nowhere may well be one.

Paradoxically, I also think it's much less likely to win. The 2012 award year was, as we've mentioned before, a really odd one, and Dead End in Norvelt is very much an outlier in the Newbery canon. It's a humorous mystery that won an award that only infrequently goes to mysteries, and almost never goes to something funny. It also represented the longest time between an author's debut and winning the Newbery.

This was partly because the list of 2012 contenders wasn't very deep, and the titles that attracted the most attention were so divisive that it might have been impossible to build consensus around any of them (see: Okay for Now, Breadcrumbs, Junonia). I don't feel like that's the case this year, and I think that's what it would take for another Gantos novel that works in genres and styles that rarely show up in the Newbery to take home the medal.

Additionally, despite the fact that the Newbery criteria state quite clearly that each book is to be considered on its own, without reference to any of an author's other works, there's no precedent for two books in the same series winning the top prize. We've seen, within a series, one book win the Newbery and then another one honor (e.g., Dicey's Song [1983 winner] and A Solitary Blue [1984 honor]); a book take an honor and then another one win (The Dark is Rising [1974 honor] and The Grey King [1976 winner]; The Black Cauldron [1966 honor] and The High King [1969 winner]); and several books in the same series be given honors (all five of Laura Ingalls Wilder's honor titles); but never two winners from the same set. It's possible that someday, we'll see it happen, but I just don't see the Norvelt books as being the ones to break that barrier.

Anyone who enjoyed Dead End will likely also enjoy Nowhere, and I think it's an excellent novel. Just don't put all your money on it winning the Newbery.


Published in September by Farrar Straus Giroux / MacMillan
Posted by Sam Eddington at 11:09 AM