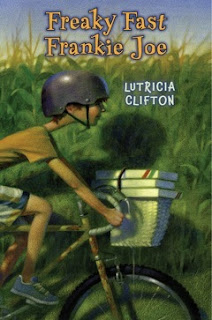 When Frankie Joe's mother is sent to jail, he has to leave behind his friends at the trailer park in Laredo, Texas, and move to northern Illinois with a father, stepmother, and four half-brothers that he's never met. This doesn't sit well with Frankie Joe, and he immediately begins making plans for his escape -- plans that come to include earning money through his own business, Freaky Fast Frankie Joe's Delivery Service.

I tend to expect "new kid comes to a small, quirky town" books to have a female protagonist, so Frankie Joe was something of a breath of fresh air to me. His voice, that of a twelve-year-old who's been entirely uprooted, was my favorite thing about the book. He's a living, three-dimensional character, one whose struggles and challenges became real as I turned the pages.

The ending is the book's weak point -- it's brief and somewhat rushed, and didn't seem to me to fully address the issues that had been present only three pages earlier. Indeed, the writing as a whole was broader and less nuanced than I tend to prefer, with the dialogue being a bit exaggerated and the plot turns being overly telegraphed, though some of that can be explained by the age and personality of the narrator. It still had a bit too much of a storyboard feel to me though.

Freaky Fast Frankie Joe is Lutricia Clifton's first novel, and I think her career bears watching. Between this book, Neversink, Glory Be, and Wonder, it's been a banner year for first-time authors, which is cause for celebration. Freaky Fast Frankie Joe isn't sufficiently distinguished in the Newbery categories to place in this year's awards, but it's certainly a good start.


Published by Holiday House, and out now.
Posted by Sam Eddington at 10:43 AM