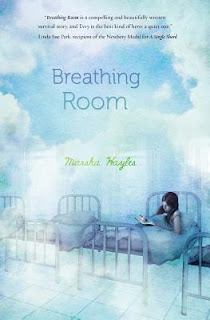 Until 1946, when trials with streptomycin began, there was no effective treatment for tuberculosis. None. If you came down with the disease, the best you could do was go to a sanatorium and hope that fresh air and bed rest would improve your symptoms. It wasn't much of a hope -- some records show that half of all patients who entered a sanatorium were dead in five years -- but it was the only hope available.

Adults came seeking a cure, but children came too -- children like thirteen-year-old Evvy Hoffmeister, the narrator of Breathing Room. Separated from her (uninfected) twin brother and the rest of her family, struggling for her health, and subject to the mind-numbing tedium of the Loon Lake Sanatorium's daily routine, Evvy has to try and be brave in deeply dispiriting circumstances.

The novel infuses small scenes and brief moments with pathos and significance. Because so much of what Evvy and the other girls at Loon Lake have to endure is unbearably banal -- lying motionless in bed, not being allowed to talk, having no distractions at all from the white walls and the thoughts in one's head -- even the slightest change is exciting and meaningful. The way that the relationships between Evvy and her roommates grow and develop is beautifully handled with almost no excess words.

Breathing Room is not an easy book. It's unsparing in its depictions of the disease, indignity, and death that take place inside the sanatorium. It has precious little action, and a plot that doesn't lend itself neatly to a summary. When one of the characters dies, the others try to figure out why it happened, but their awkward, overdramatic explanations simply point out that the disease does whatever it wants, inscrutably and unstoppably. It's a quiet book, but a challenging one.

But it rewards those challenges. It's of high literary quality, particularly when it comes to its characters, its setting, and its themes. It's a masterful meditation on a time, a place, and a group of people that history has largely forgotten -- one that both captures their lives and universalizes their experiences, in the tradition of Willa Cather or Scott O'Dell.

With the possible exception of Wooden Bones, Breathing Room is my favorite book of the year. I've heard little buzz about it, and I wouldn't dare predict it as the Newbery winner. But I do predict that I will be talking it up to anyone who will listen.


Published by Henry Holt / Macmillan, and out now.
Posted by Sam Eddington at 9:02 AM