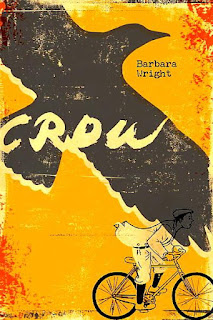 The Wilmington Insurrection of 1898 is one of the lowest points in American history. It remains the only successful coup d'etat in the United States, as a group of white supremacists overthrew the democratically elected mayor and town council and installed their own local government. The local black-owned printing press was destroyed by a mob, many blacks were killed, and thousands more were driven from town. Appeals to President William McKinley and the federal government for justice were met with stone-cold silence. It would be sixty years -- sixty years! -- before anything like a restoration of black civil rights took place.

Crow follows Moses Thomas, a black youth on the cusp of adolescence, through this time period. Moses' father is an employee of the Daily Record, and a prominent leader in the community, while his mother works as a housemaid for a white family, and his grandmother takes in wash and ironing. As the Insurrection unfolds, Moses' world begins to unravel, and he learns firsthand how cruel life can be -- as well as the reality of bright spots amidst the gloom.

This is not a happy novel. Everything is not magically made right at the end -- understandably, since it spans less than two years, rather than the better part of a century. But the prose soars, and Moses emerges as an indomitable character, one who understands that ideas of justice and truth will prevail, in his own personal life, if not always in the larger community. It's a hard book, but somehow a beautiful one.

I've read a lot of books this year that touch on themes of Civil Rights and race relations, including No Crystal Stair, Abraham Lincoln & Frederick Douglass, Glory Be, and Little Rock Girl 1957. But of them, I think Crow is the best. It's beautifully-written and harrowing, a novel that doesn't shy away from the reality of evil, but at the same time provides characters with warmth, depth, and even joy, no matter how bleak the circumstances become. I highly, highly recommend this book, and I imagine we'll be discussing it further as we start to focus in on our shortlist.


Published in January by Random House.
Posted by Sam Eddington at 2:20 PM