Newbery Wayback Machine: It's Like This, Cat, by Emily Cheney Neville (1964) 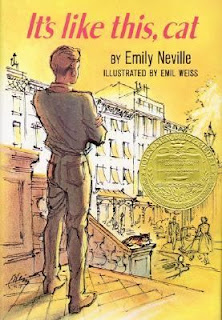 On our About the Bloggers page, all three of us list our three favorite Newbery winners. Mine -- recognizing that I haven't read my way through all of the past winners yet -- are Island of the Blue Dolphins, When You Reach Me, and Criss Cross. I stand by those choices, but I feel like I should add that, in a very, very close fourth place, I'd put Emily Cheney Neville's 1964 winner, It's Like This, Cat.

The list of Newbery winners from the 1960s includes some of the greatest crowd-pleasers in the history of the award: in addition to Island (1961), there's A Wrinkle in Time (1963), From the Mixed-Up Files of Mrs. Basil E. Frankweiler (1968), and The High King (1969). It's Like This, Cat, however, features no abandoned islands, no travel to dystopian planets, no squatting in museums, and no sword-and-sorcery quests. It's a low-key, episodic novel of a young man in a New York City that's now gone, but not quite forgotten. The book requires the reader to stop and absorb the details of its setting, the cadence of its language, and the sharpness of its small details -- but it amply rewards the effort.

It's Like This, Cat follows Dave Mitchell, whom we meet during the tail-end of his last year of junior high, and leave almost a year later. He acquires the titular Cat in the first chapter, and Cat serves to tie the various episodes together -- becoming the point of introduction between Dave and an older boy, Tom Ransom; giving Dave and a girl named Mary something to talk about when they first meet on Coney Island; serving as a connection between Dave and Aunt Kate, the eccentric neighbor who first gives Cat to Dave. Each of these episodes is as finely-finished as a cameo engraving, and although there's little in the way of a through plot, the episodes are all linked thematically, with themes of responsibility, choice, and the nature of friendship interweaving like a motet.

Few books like It's Like This, Cat are published today. At fourteen, Dave is older than almost all middle-grade protagonists, and the book's themes may have limited resonance for most middle-grade readers. And yet, even though some weighty themes (parental abandonment and family estrangement) and unsettling incidents (the violent, senseless death of one of Aunt Kate's kittens) raise their heads, the tone of the novel is decidedly more muted and less heightened than that of most recent YA literature. The best relatively modern point of comparison might in fact be something like Criss Cross, although that one is an almost cinematic ensemble story, and It's Like This, Cat is told by a single first-person narrator.

Two Honor books were named in 1964, neither of which is particularly well-remembered: Rascal, by Sterling North, and The Loner, by Ester Weir. Most of the other American books from that publishing year that have lasted were either picture books (Where the Wild Things Are; The Gashlycrumb Tinies; Swimmy), or were in some other way unlikely to win a literary award (Encyclopedia Brown, Boy Detective; Happiness is a Warm Puppy). It's Like This, Cat may be a largely overlooked title today as well, but in my opinion at least, it's a more than worthy Newbery winner.

Posted by Sam Eddington at 2:56 PM