For the second time this year, we pause our series on Newbery Winners Past to participate in a Walden Pond Press blog tour. This post will be a bit different, however. Ms. Bixby's Last Day is, among other things, a book about a teacher and the students whose lives she's changed, and the good folks at WPP requested that I take some time during this entry to talk about a teacher who had that kind of impact on my own life.

With that in mind, let me tell you a story.

When I was an undergraduate at the University of Houston, I had to take two American History courses as part of my core requirements. As I was talking with some of my friends about when I should fit those courses into my schedule, and which professor's section I should try to register for, one name kept coming up.

"Dr. Orson Cook. His class is really tough, but you learn a lot."

The endorsements were strong enough that I did indeed register for his class, and it remains one of the better decisions I've made.

Dr. Orson Cook -- we always thought of him using both names, since there was at the time a Dr. Cooke in the Political Science department -- had much of the affect of what I used to think of as a Southern Gentleman. He had the accent and the carefully tidy facial hair, and during all the time I spent in his class, I think he only ever referred to me as "Mr. Eddington." His comments ranged from the pithily insightful ("The enforcement of half of something is worse than the non-enforcement of all of it.") to the wryly humorous ("Think of Kansas and Nebraska. I know it's hard to do. Just imagine some badly-drawn rectangles in the middle of the country."), and as you can see, I can recite many of them from memory almost twenty years later. He was a fierce believer in the ideals of equality and justice that America claims to stand for, and also a clear-eyed and incisive critic of the times when the country hasn't lived up to those ideals. A vast portion of my knowledge of the sweep and shape of the history of the United States is directly traceable to Dr. Cook.

And yet, I don't think of any of those things as the most important lesson I learned from him. That came after the first test I took in his class.

I had studied hard for the exam, and I felt confident in my knowledge. As I wrote the various short essays that comprised the bulk of the test, I was sure that I had relayed that knowledge effectively. And yet, when the test was returned to me, it came back with...an 83. Not terrible, not a failure, but nowhere near as good as I thought I'd done.

I was confused enough about why that I went up to Dr. Cook after class and asked him about the grade. I'll never forget what he said to me.

"You know everything that I told you in class. That's a B. If you want an A, you have to do your own research and bring that information in."

The message was perfectly clear to me. I was responsible, in the end, for my own education. People could teach me, and that would get me a lot of the way there, but if I wanted my knowledge to be exceptional -- not average, not even above average, but exceptional -- I couldn't just listen passively to what I was taught. I had to use that information as a springboard to do my own research, ask my own questions, and evaluate what I learned. Only by doing so could I really become educated.

I learned a lot during college, but there's not a single thing that was as important as that.

After I left the classroom that day -- even though in the moment I was somewhat stung by Dr. Cook's answer -- I went to the library and checked out twenty books about the historical period we were studying. I sat in my dorm room and read them for hours, trying to figure out how what I was reading fit into the information I'd learned in class. In the weeks that followed, I peppered Dr. Cook with questions, both during and after class, and to his everlasting credit, he not only answered them, but directed me to resources where I could learn more.

I did earn an A for the semester, and of all the grades I got in college, that's probably the one I'm most proud of. When I registered for the next semester's classes, I signed up for Dr. Cook's section of the other American History course, and that one was also a marvelous experience.

Thanks, Dr. Cook. Thanks for teaching me, not only about history, but about what learning and education actually can be. 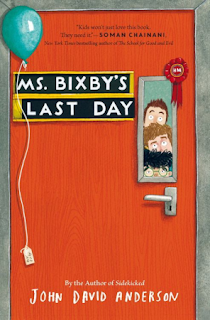 As for Ms. Bixby's Last Day itself, it's the story of three sixth-graders, Topher, Brand, and Steve, and their special teacher, the titular Ms. Bixby. Within the first few pages of the book, Ms. Bixby is diagnosed with cancer, and tells the class that she won't be able to finish the school year. However, our trio of students embark on an adventure to give Ms. Bixby the sendoff she deserves and show her what she's meant to them.

In the wrong hands, this story could be sentimental mush, but John David Anderson's writing avoids those pitfalls. Every problem isn't magically resolved, and there's no deus ex machina ending, but we get a chance to spend time with real, three-dimensional characters, and to learn along with them about what has -- and will -- really made a difference in their lives. The book is one of the better novels of its type that I've read, and I feel no compunction about recommending it. (I promise that WPP doesn't actually pay me anything for these reviews; I genuinely feel strongly about this one!)

If you'd like to explore further, Walden Pond Press has a video about the book, and has also made an excerpt available online. Here also are the other stops on the blog tour if you'd like to check them out:

Posted by Sam Eddington at 9:41 AM