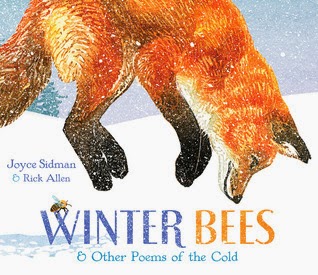 After last year's unorthodox but effective What the Heart Knows, Joyce Sidman returns to familiar territory with Winter Bees & Other Poems of the Cold. As in her 2011 Newbery Honor book, Dark Emperor & Other Poems of the Night, Sidman produces a series of nature poems around a common theme, and pairs each one with a prose nonfiction note that elaborates on the poem in question's subject.

The book starts with "Dream of the Tundra Swan," a stunning tour de force of alliteration, assonance, and startling imagery. It's probably one of the fifteen or twenty best poems I've ever read for children; it's that good. I'm not familiar with very many books for children that come out of the gate as strongly, and the piece raises the expectations for the book sky-high.

Perhaps it's inevitable then that the remainder of the volume doesn't quite live up to that initial salvo. The book jacket indicates that "Dream of the Tundra Swan" was the first poem Sidman wrote for the collection, and that initial burst of inspiration turned out not to be entirely sustainable. Interestingly, the second-best poem in the book might well be the very next one, "Snake's Lullaby," which, if it isn't at that level, at least comes close in its incisive description of hibernating garter snakes.

That's not to say that the rest of the book is a failure by any means. Sidman is a highly-skilled poet, and her work never dips below the level of solid craftsmanship. But Winter Bees is so obviously front-loaded that the concluding impression doesn't match the initial hopes that it raises -- especially since it doesn't have a final piece that ties everything together, like Dark Emperor did.

It might have been better to finish the book with the best poem, but the schema that Sidman has chosen doesn't allow her to do that. The sequencing at least loosely follows the rhythm of the season, with the first few poems being about the onset of winter, while the last few concern its end. That's certainly a legitimate choice -- and one that's similar to the one Sidman used in Dark Emperor -- but it does place some serious constraints on her ability to move individual pieces around for maximum impact.

This maybe makes it sound like I enjoyed Winter Bees less than I did. It's an excellent book, and one that solidifies Sidman's place in the uppermost echelon of American children's poets. "Dream of the Tundra Swan" ought to be showing up in anthologies for generations to come. I'm not sure the book as a whole is as consistent as Dark Emperor, however, and given that that one was kind of a left-field honor book, I don't know that Winter Bees will duplicate its awards success.


Published in November by HMH.
Posted by Sam Eddington at 7:48 AM