2014 Contenders: What the Heart Knows, by Joyce Sidman 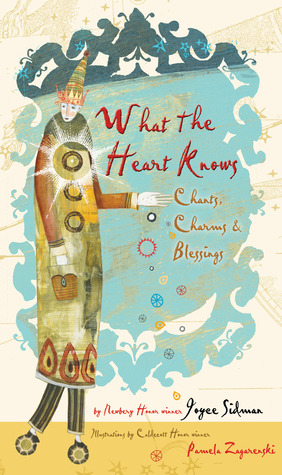 Joyce Sidman's newest book of poetry is a strange beast indeed. The subtitle is "Chants, Charms & Blessings," and in her note to readers, Sidman talks about how humans have always "used language to try to influence the world," and encourages readers to make poems of their own and "chant them, in your own voice." She divides her book into four parts: Chants & Charms, Spells & Invocations, Laments & Remembrances, and Praise Songs & Blessings. The result is something like a poetic Book of Common Prayer (or Book of Shadows), with all of the elevated diction and heightened emotion such a mode requires. Both the subject matter and tone are widely varied among the individual poems, soaring from lost socks to the slippery nature of time, and then swooping back down to ugly sweaters, all the in the space of three pages.

I don't believe I've ever had cause to mention my religious background on this blog, or in any of my writing about children's books. In the interest of making clear the kind of reader I am, though, I think it's only fair to say that I have been a solitary Pagan, a high church Episcopalian, an enthusiastic half-Jew, a Unitarian-Universalist, and a quasi-Buddhist in my life. Like the titular character in Life of Pi, I'm spiritually profligate - I just love a good prayer. And even outside of overt spirituality, I've built my entire life around the idea that words can shape reality. This book basically speaks directly to my heart.

Even as a biased reader, though, I think it's fair to say that this is a magnificent collection of poetry. Sidman is the Kevin Henkes of children's poets: I don't know any serious children's poet who speaks so respectfully to their readers. The best poetry is always about more than what it's about, and Sidman achieves that more often than not in this collection, turning ordinary objects into metaphors for loss, transience, and comfort. She does not restrict herself to the tangible, though - occasionally the poems enter the realm of pure surrealism, as in "Song in a Strange Land," which plays out like a fever dream.

What the Heart Knows is not only distinguished thematically, though. The poems are also characterized by  razor-sharp imagery, as in "Blessing on the Smell of Dog": "May his scent seep through / perfumed shampoos / like the rich tang of mud in spring." The sound of the words themselves is deeply satisfying as well, filled with the repetition, alliteration, and insistent rhythms that characterize the tradition of sacred poetry. The fact that these are secular prayers only adds to their power, solemnizing the topics we usually dismiss.

Other reviewers have pointed out that the poems are not perfectly equal in quality, and that's fair, but there's very little filler, in my opinion. Nina also questioned whether the illustrations distract from the poetry, and I think that is actually a good question - I was so focused on the text that I barely noticed the illustrations at all. It's possible that the book would be even more effective with a simpler design. There is the age question as well - this is really aimed higher than Sidman's usual middle-grade age range, but surely not too high for the Newbery.

Overall, it's a gorgeous piece of work - definitely in my top five books of the year - and I do hope it gets some love on Newbery day.

Published in October by HMH Books for Young Readers
Posted by Rachael Stein at 3:12 PM