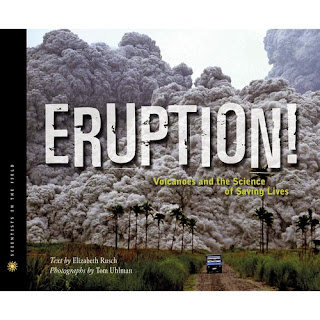 Last year was a true banner year for children's nonfiction, featuring such exceptional titles as Moonbird, Temple Grandin, Hope and Tears, Titanic: Voices from the Disaster, We've Got a Job, Abraham Lincoln & Frederick Douglass, and, of course, Bomb. That's an amazing list of books right there, and the fact that they came out in the same twelve-month period is nothing short of astonishing.

I guess it's not a huge surprise that this year's crop of nonfiction has generally paled in comparison. Some of that is just the vagaries of publishing -- Phillip Hoose and Gwyneth Swain, for instance, didn't have a book out this year, and Deborah Hopkinson's new one was historical fiction. Steve Sheinkin and Russell Freedman did have new ones out -- but though both books were certainly good, the general consensus seems to be that they don't quite hit the heights of their titles from last year. In fact, though I've enjoyed several nonfiction books this year (Courage Has No Color and Collector of Skies in particular), I'm not sure there's a single one that I'd put in the same category as the seven titles I listed in the first paragraph.

However, Eruption! has been getting a fair amount of good press, with Jonathan Hunt over at Heavy Medal even touting it as "arguably my favorite nonfiction title of the year." As such, I felt like I had to pick it up, and I was immediately sucked into the story of the brave and resourceful scientists of the Volcano Disaster Assistance Program. The book focuses on two of the VDAP's greatest triumphs -- their studies of Mount Pinatubo in 1991, and Mount Merapi in 2010. In both cases, the VDAP scientists accurately predicted major eruptions a few days before they occurred, enabling evacuations that saved tens of thousands of lives. Elizabeth Rusch's sentence-level writing is engaging, and I thought she did very well at bringing the reader right into the middle of the action.

I have some questions, however, about places where the style -- and, more especially, the editing -- seemed to get in the way of the Presentation of Information item in the Newbery criteria. For instance, the text mentions the technical word "fumaroles" twice, once in a chart on page 10, and in the main text on page 11, without either defining the word or explicitly referring the reader to the glossary in the back. However, when the word appears in the main text on page 15, it's defined within the sentence -- and then defined again, using almost the exact same words, on page 21. Additionally, on page 63, the text lists the name of a village as Dusun Petung, but the photo caption simply calls it Petung. The map on page 8 also misspells the name of Mount Rainier. Those are small points, to be sure, but in an informational text, I don't think we can just ignore them.

When I finished Eruption!, I was glad to have read it, and I felt like I'd learned a lot about an organization I'd never before even heard of. I don't think, however, that it has that je ne sais quoi that the best of last year's titles did, and I find the sloppy editing troubling. I'd recommend in a heartbeat that any public library purchase Eruption! for their collections, but I don't think it's a serious Newbery contender, and I still think Courage Has No Color would be a better Sibert selection.


Published in June by Houghton Mifflin
Posted by Sam Eddington at 11:33 AM