2014 Contenders: If You Want to See a Whale, by Julie Fogliano 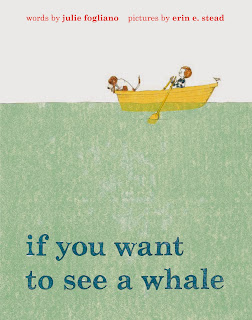 Every year, a picture book or two gets bandied about in the (online, publicly visible) Newbery discussions. Last year gave us Each Kindness and Step Gently Out. This year, we've had Africa Is My Home (assuming you take it as a picture book, rather than a heavily-illustrated work of short fiction); the other title that I've seen crop up in the most discussions is probably If You Want to See a Whale.

In a way, it's academic exercise, discussing these picture books. No "traditional" picture book has ever won the Newbery (though that's an assertion that assumes you agree with me on how to categorize A Visit to William Blake's Inn [1982 winner], which I think of as an illustrated collection of poetry rather than a picture book, and which is filed in the 811s in our local library system, but which did win a Caldecott Honor). The Honors list isn't much better -- aside from another poetry book, Dark Emperor (2011 Honor), the only picture books I can find are Wanda Gág's Millions of Cats (1929 Honor) and The ABC Bunny (1934 Honor), from the pre-Caldecott days. (If you can think of one I missed, leave a comment!)

And yet I feel like it's an important discussion to continue having. Even without the iconic illustrations, the texts of Goodnight Moon and Where the Wild Things Are and Horton Hears a Who are, I would argue, key parts of American children's literature. It's very hard to talk about picture books without considering the illustrations -- it feels kind of like trying to evaluate a symphony without ever mentioning the string section -- but the ones that fall within the Newbery range (which is the overwhelming majority of them) deserve our attention nonetheless.

With all that said, it seems to me that the text of If You Want to See a Whale does several things extremely well, and a few things maybe not as well. The sound of the book when read aloud is fantastic -- Julie Fogliano has a keen ear for alliteration and assonance, and lines such as the ones in which she describes clouds "in the sky that's spread out, side to side" are a joy just to say. The ending of the book in the text is also beautifully ambiguous, fading out on the lines "and wait... / and wait... / and wait..." The last of illustrator Erin E. Stead's pictures shows the whale quest coming to a successful end, but it does so wordlessly -- although she's given us a tidy ending, Fogliano as author has declined to do so.

The main thing that bothered me -- and maybe it's just from sitting through too many Creative Writing workshops back in college -- was the book's unwillingness to fully commit to its central conceit. I know that the book isn't really about whale-watching at all, but a metaphor is best when it works on both the literal and figurative levels. A window isn't helpful for watching for whales (or at least, nowhere near as helpful as being outside), and if you're on a beach or in a boat, roses and bugs aren't likely distractions.

This doesn't mean that If You Want to See a Whale isn't a delight, but I do think it means that it's not Newbery material. When Rachael reviewed Each Kindness last year, she talked about the intense difficulty of writing a short text. One flawed line in a 300-page novel might pass by unnoticed; the same isn't true of a poem of 52 lines, several of which are only two or three words long. Surviving the scrutiny that such a short text invites is an incredibly high bar, and I'm unconvinced that Whale clears it.


Published in May by Roaring Book Press
Posted by Sam Eddington at 6:29 AM