2014 Contenders: Stardines Swim High Across the Sky and Other Poems, by Jack Prelutsky 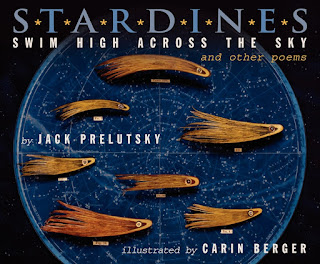 Jack Prelutsky has long had an interest in imaginary creatures with portmanteau names. Behold the Bold Umbrellaphant and Other Poems (2006) was a collection of nothing but poems about such creatures, and several pieces from Prelutsky's last poetry volume, I've Lost My Hippopotamus, also used this trope. Picking up right up where Prelutsky left off, Stardines is a collection of sixteen such poems, each one describing a creature that is a "blending of the animate and inanimate," as the jacket blurb says.

This highly specific focus works very much in the book's favor. Where Hippopotamus was sometimes inconsistent, Stardines doesn't include any pieces that are obviously second-tier. Similarly, the fact that there are only sixteen poems -- none of which is more than three stanzas -- means that the concept doesn't have time to overstay its welcome.

As we talked about in last year's discussion of Hippopotamus, one of the unwritten, yet never-broken rules of the Newbery is that Humorous Poetry Doesn't Win. As good as Stardines is, I don't foresee it being the book to break through that barrier. Even in what's shaping up to be a fairly weak year, I don't think Stardines is the leading poetry candidate (that would be Follow, Follow), and the committee is notoriously loath to honor more than one volume of poetry in any given year.

However, we still might see Stardines on awards day. In her mid-year awards post, Elizabeth Bird over at Fuse #8 argues that Carin Berger's gorgeous 3-D diorama photography makes Stardines a worthy Caldecott contender. I'm not by any means a Caldecott expert, but the illustrations are jaw-dropping, and perfectly matched to the text. I'll be very curious to see if the Caldecott committee has a positive response to the artwork.


Published in February by Greenwillow / HarperCollins
Posted by Sam Eddington at 10:55 AM