2014 Contenders: Courage Has No Color, by Tanya Lee Stone 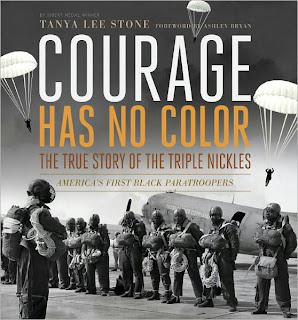 There's a famous quotation about World War II from historian Stephen Ambrose that shows up twice in Courage Has No Color: "Soldiers were fighting the world's worst racist, Adolph Hitler, in the world's most segregated army." In the end, WWII would be a turning point in the history of race relations in the US military, but taking segregation out of the military was difficult, full of false steps and discouraging setbacks.

Few units had as much to do with this process as the "Triple Nickles," the 555th Parachute Infantry Battalion. They were the first black paratroopers in the United States armed forces, formed and trained in the heart of the second world war, and then sent to the west coast, where they were pioneers in the field of smokejumping. In Courage Has No Color, Tanya Lee Stone uses personal interviews and oral histories, as well as the handful of previously published sources, to tell the story of the Triple Nickles, as well as to outline how their story fits into the story of the desegregation of America.

This is an extremely well-researched and documented book -- I doubt anyone will have any of the questions about attribution that came up in the discussions last year of Bomb. Though it's not a Newbery criterion, the book is also gorgeous to look at; the archival photographs alone are worth the purchase price. Along with the very different Collector of Skies, it's probably the cream of this year's nonfiction so far.

I hesitate to put it in the Newbery discussion, however. The prose is effective, but not particularly artful, and the panoramic nature of the book means that even the characters on whom the most time is spent, such as Walter Morris, the man most responsible for the formation of the unit, don't fully emerge as individuals (though, given my well-documented resistance to ensemble casts, that might not be as much of a problem for other readers). Additionally, the Newbery criteria mean that some of the book's strongest points -- layout and photography -- have to be set to one side.

Stone has already won a Sibert (Almost Astronauts, 2010), and that award's guidelines are much more friendly to Courage Has No Color's considerable strengths. We're only halfway through the year, but I don't think it's out of the question for Stone to become the first two-time Sibert winner.


Published in January by Candlewick.
Posted by Sam Eddington at 2:00 AM