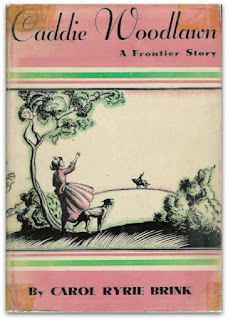 Caddie Woodlawn, which won Carol Ryrie Brink the 1936 Newbery Medal, is based on the real-life adventures of Brink's grandmother, Caddie Woodhouse. Set in frontier Wisconsin just before and after the end of the Civil War, Caddie Woodlawn details the escapades of Caddie and her siblings as they navigate both the physical landscape of the Upper Midwest and the emotional landscape of growing up. It was immensely popular, and it spawned a sequel (Magical Melons, 1939, in print these days as Caddie Woodlawn's Family), a Brink-written 1945 radio drama, a 1989 TV movie, and even a 2011 stage musical.

It's also something of a controversial book these days. Just to take one example, a well-known piece by American Indians in Children's Literature founder and 2019 Arbuthnot Lecturer Debbie Reese talks in part about her daughter's highly negative reactions to the book's depictions of Native Americans.

And boy, those depictions are problematic. The Woodlawns' neighbors are about as racist as possible (witness their talk about a preemptive massacre against the local tribe). And although Caddie and her family are clearly presented as the most "enlightened" of the settlers -- Caddie undertakes a dangerous ride to warn her friend Indian John, and Mr. Woodlawn puts the kibosh on his neighbors' murderous plans -- that's not a particularly high bar. In perhaps the novel's most uncomfortable passage, Indian John, who is leaving the area for an unspecified period of time, leaves a treasured possession with Caddie: a scalp belt, inherited from his father. Caddie and her siblings decide that this provides them with an excellent opportunity to earn some side income, and charge admission to their school friends to see the scalp belt of "Chief Bloody Tomohawk." I kept waiting for the children to get some kind of comeuppance for this behavior...but they don't. The hired man, Robert Ireton, catches them, but is only upset that they've lit a candle in the barn, and sings an Irish folk song for the children as part of the show when they tell him what is taking place.

There are moments in Caddie Woodlawn that work -- the bit where younger brother Warren completely fails at his school recitation is almost Anne of Green Gables-esque, and older brother Tom's impromptu piece of fiction about Pee-Wee the Farmer is a piece of inspired lunacy. Overall though, I had a hard time with this one, even before the ending, which dovetails a kind of maudlin patriotism that's difficult for me to take, and a final bit that's simply an opportunity for me to repost my favorite Gary Larson cartoon*: 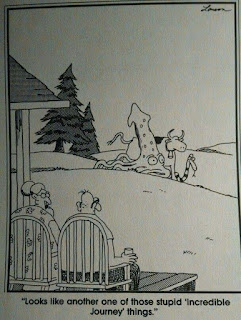 Weirdly, Caddie Woodlawn won the Newbery the same year that Little House on the Prairie failed to win or honor. Both books have many of the same strengths and drawbacks, and it's surprising to me that one book won while the other was shut out. The four Honor books from 1936 are ones I haven't made it to yet; all of them are lesser-known works from authors more famous for other things. (The Good Master is by Kate Seredy, who would win the 1938 Newbery for The White Stag; Young Walter Scott is by Elizabeth Janet Gray, who, after a name change to Elizabeth Gray Vining, would win the 1943 Newbery for Adam of the Road; All Sail Set is by Armstrong Sperry, who would win the 1941 Newbery for Call It Courage; and Honk, the Moose is by Phil Stong, an author mostly known for his adult works including State Fair, which was adapted into a 1945 musical film with songs by Rogers & Hammerstein.) As such, it's hard to say Caddie Woodlawn was a mistake choice, but it's not one of my favorites.

*Yes, I know Caddie Woodlawn predates The Incredible Journey by 25 years, but I'll stand by my response anyway.