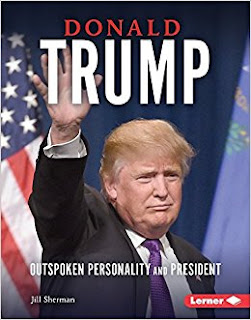 I stopped by my local library the other day, and was browsing the shelf of new children's books. It turned out that the new batch of presidential biographies written after Donald Trump's win had arrived, and I couldn't resist taking this one home to have a look at it.

The presidential election of 2016 probably wasn't the nastiest of all time. (I've always enjoyed the tales of 1800's election, which featured, among other things, Thomas Jefferson's supporters accusing John Adams of having "a hideous hermaphroditical character," and Adams' supporters in turn spreading rumors that Jefferson had actually died, at a time when that was a lot harder to fact-check.) It was, however, the most deeply unpleasant of my lifetime, and I was curious to see how Jill Sherman would choose to address this unpleasantness in Donald Trump: Outspoken Personality and President.

The answer is that Sherman largely sidesteps the issue. She does mention that Trump's announcement of his candidacy contained statements that "immigrants can bring problems to the United States," but there's no mention of what kind of problems Trump mentioned, or of the fact that his comments specifically targeted Mexicans. There's no mention at all of Trump's Access Hollywood tape (or indeed, of any of his questionable remarks about women), of the proposed border wall, or of Trump's role in the "birther" movement. There's a bland mention that "Trump made other controversial statements that some people considered to be offensive," but that's about it. (It does, however, briefly explain the scandal about Hillary Clinton's emails.)

In fairness, I wouldn't have wished the job of writing this book on my worst enemy. At a time of deep political polarization, writing a biography about one of the most controversial candidates in the country's history is a thankless task. I'm not actually sure it's possible to write a successful version of this book; I am certain that it's impossible to write a version of it that would please everyone. I should also mention that the first part of the book, dealing with Trump's pre-political life, works better than the second part. But it's easy to see how hard Sherman is struggling to present a neutral view of her subject, and the seams, so to speak, never stop showing.


Published in April by Lerner Publications
Posted by Sam Eddington at 11:04 AM