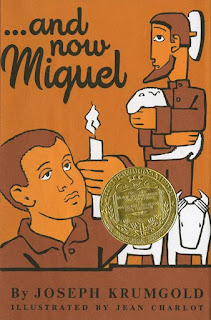 Twelve-year-old Miguel Chavez's family raise sheep in New Mexico. Each summer, the men take the sheep into the pasture, high in the Sangre de Christo Mountains. More than anything, Miguel wishes to take his place among the men and join them in the mountains. However, as Miguel finds, even when wishes come true, there's a cost.

...And Now Miguel is a quiet, thoughtful book, one that succeeds largely on the strength of Miguel's first-person narration. I've read a lot of books told in the first person, but very few in which the character's personality comes through as strongly. Miguel is, in many ways, a precocious twelve-year-old, but he's still only twelve. He is frustrated by the things he doesn't understand, loses patience with others when his plans don't go as expected, and doesn't always know how to express himself so others will know what he means. But he has a big heart, fierce family loyalty, and a burning desire to figure out how the world around him works.

Miguel is always pensive, and surprised me at times with its depth. Near the end of the book, Miguel and his older brother Gabriel have a theological conversation about the ways that the Saints do -- or don't -- intervene in the world; almost any adult author would be proud to work a conversation as carefully considered into their novels. It's also noteworthy that, as in Joseph Krumgold's other Newbery winner, Onion John (1960 award), this is a book without any villains. There are only people trying to do the right thing as they understand it, who sometimes come into conflict with each other.

Miguel had a somewhat complicated genesis. Krumgold was a screenwriter, and was hired by the US State Department to produce a narrative documentary on rural Hispanic workers. The resulting hour-long film, also titled ...And Now Miguel, also came out in 1953. The committee apparently still considered the novel version an "original work" for Newbery purposes.

I've seen the documentary, which is available in full on YouTube. Like the novel, though in a different way, it captures the wide, seemingly empty vistas of New Mexico, and the introspection that such a place can engender. The most immediately noticeable difference is that the film contains no dialogue at all -- just Miguel's narration, and some not-entirely-convincing Foley work. (My guess is that it was shot using a camera that didn't have the capability of recording audio.)

The plot, in its essentials, is the same in both the film and the novel, which leads me to another question. The film comes billed as a documentary, but the plot is so tightly constructed, and the narrative scenes in particular so obviously staged, that I can't help but wonder if the story actually happened or not. I don't know, but my library's copy of Miguel was filed in the fiction section, and that may be the best way to engage with it.

(As a side note, it's fascinating to note the way that the film plays up its patriotic message in the scene near the end with Gabriel and Miguel, while completely leaving out the theological questions that preoccupy Miguel in the book. Perhaps Krumgold felt more free to move in that direction when producing material that wouldn't be published under the aegis of the State Department.)

Five Honor books were named in 1954, including two different Meindert De Jong titles (Shadrach and Hurry Home, Candy). None of them, however, are likely to be familiar to most present-day readers. The one book from that publishing year that retains the most fans wasn't eligible -- The Silver Chair, by Irish-born British writer C.S. Lewis. ...And Now Miguel was a solid choice for the Newbery medal then, and remains readable and interesting today.