2016 Contenders: The Story of Diva and Flea, by Mo Willems 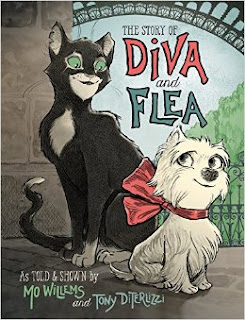 Everyone with even a passing interest in children's literature knows Mo Willems. He's created some of the most iconic characters of the past twenty years: Elephant & Piggie, the Pigeon, Trixie and Knuffle Bunny, Cat the Cat.

What he hasn't done, at least up until now, is write a novel. Each of his books to this point has been either a picture book or an easy reader. The Story of Diva and Flea, then, is his first foray into a longer form.

That's not to say that it's a form that's particularly long in the grand scheme of things. My ARC of Diva and Flea runs a mere 67 (heavily-illustrated*) pages, and it's pitched at the same emerging readers who enjoy Kate DiCamillo's Mercy Watson books and similar fare. Perhaps it's better to refer to it as a "chapter book," as I imagine much of its readership will do.

The plot involves Diva, a tiny dog who resides in posh comfort at 11 avenue Le Play in Paris, and Flea, a large cat who considers himself a flâneur, which Willems repeatedly defines as one "who wanders the streets and bridges and alleys of the city just to see what there is to see." When they meet by chance and become friends, will Diva learn to be more adventurous? Will Flea see the benefits of domesticity?

I described the book to Rachael as "a more G-rated Lady and the Tramp," and even though she questioned whether such a thing was actually possible, I'll stand by that description. There's no romance, no baby, and no actual danger; what remains is a mismatched pair where each learns to appreciate the other's point of view and to be willing to take (minor) risks in order to do so. Even that "conflict" is subdued -- once the protagonists meet properly, there's really no clash of wills or second-act argument.

Perhaps more noticeably, the signature Willems humor is decidedly muted. There are the odd moments that brought a smile to my face, such as when Flea asks if "Breck-Fest" is a friend of Diva's, but there's nothing here that comes close being as funny as the Pigeon's tantrum in Don't Let the Pigeon Drive the Bus! or the slow-burning exasperation of There is a Bird on Your Head!

That doesn't mean Diva and Flea is anything less than pleasant, because it's perfectly serviceable. But for someone with Willems' pedigree, the expectations are sky-high, and I feel like Diva and Flea doesn't live up to them.


*(As an aside, I thought it was odd that Willems, he of the three Caldecott Honors, two Geisel Awards, and five Geisel Honors, didn't illustrate the book himself, but Tony DiTerlizzi's beautiful drawings are a perfect match for the text.)


Publication in October through Disney / Hyperion
Posted by Sam Eddington at 2:03 PM