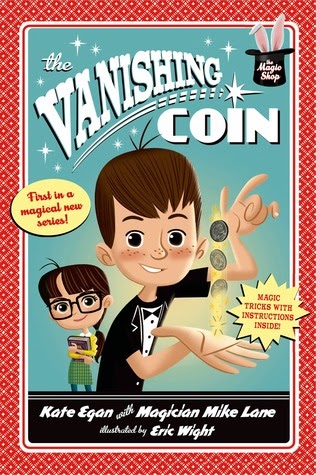 Fourth grader Mike Weiss is constantly in trouble. He means well, but he has trouble concentrating, sitting still, and remembering what he's supposed to be doing. As a result, his parents won't let him be on the soccer team this year, even though both of his best friends are playing. Instead, he divides his time between reluctantly hanging out with model student Nora, and trying to avoid Jackson, the neighborhood bully. Things aren't looking very hopeful -- until a chance visit to a magic shop called the White Rabbit and a meeting with its proprietor, the mysterious Mr. Zerlin. Magic becomes Mike's number one interest; it may also be something he's genuinely good at.

I read The Vanishing Coin as a sort of palate cleanser in between more "literary" books. It's not the kind of book that's going to win any of the ALA awards, and that's as it should be. The plot is threadbare and shopworn, the prose purely functional, and the characters mostly one-dimensional. A work of fine art, it isn't.

And yet it's the kind of book that I can see at least some kids really loving. It reads quickly, and doesn't contain any excess weight. Best of all, it contains actual instructions for performing the tricks mentioned in the text. These instructions are clearly written and well illustrated; I'm pretty sure that, with a bit of practice, I could perform any of them, and I believe a child would be able to as well. (This is almost certainly due to co-author Magician Mike Lane, whose previous writing credit was 2012's Magic Mike's Miraculous Magic Tricks, published right around the time that a certain film likely prompted the small change in his nickname.)

The other author, Kate Egan, has worked on several kinds of "high-interest" books; her credits include such titles as Disney Bunnies: Thumper's First Snow, The Magic School Bus Fights Germs, and The World of The Hunger Games. She understands the importance of keeping things simple, as well as the value of a clever hook.


The book ends on a mild cliffhanger, and volume 2 (The Incredible Twisting Arm) is actually scheduled to be published on the same day. If you have a school or public library, I'd plan on snapping this series up. The Vanishing Coin may not be awards material, but it's a solid "popular" title, and sometimes, that's enough.


Publication in April by Feiwel and Friends / MacMillan
Posted by Sam Eddington at 8:25 AM