2014 Contenders: Better Nate Than Ever, by Tim Federle 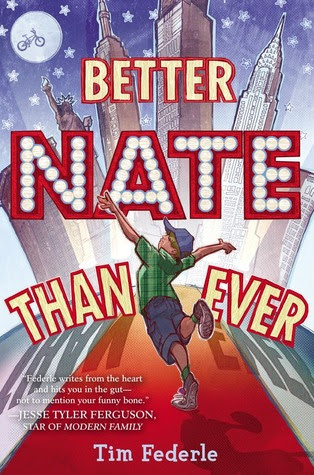 Thirteen-year-old Nate Foster is your quintessential small-town social outcast. He's chubby, terrible at sports, and prone to belting out Broadway songs in public bathrooms. When he and his loyal BFF Libby learn about an open casting call for the Broadway musical adaptation of E.T., they hatch a plan. Nate will take the bus from Pennsylvania to New York, audition, and be on his way home before his family ever knows he's gone. Naturally, things don't go exactly according to plan.

I love this book. It's just so loveable, as is its plucky, awkward protagonist, and it is Nate, as character and as narrator, who carries the novel on his sweaty middle school shoulders. Debut novelist Federle really nails the voice of a kid at the worst, in-betweeniest age. Sometimes Nate is wiser than his years, but more often he is painfully and hilariously naive. On his first visit to New York, he's starstruck by the "biggest Applebees in the world," and tries to strike up a friendship with a street hawker. A lot of this is played for laughs, but by the end of the book the tone grows gradually more poignant.

And that brings us to Federle's second great accomplishment: this is an LGBTQ book without being an LGBTQ book. Nate never states outright that he is gay - in fact, by the conclusion, he's only just begun to tentatively question his sexual identity. In both obvious and subtle ways, though, Nate's urban odyssey leads him towards that process of introspection. One of the most powerful passages comes when Nate explains the allure of New York to his aunt's (gay) roommate. "`Two boys were dancing together in a club,' I want to say, `and nobody stopped them.' But instead I say `I want to be on Broadway, and you can't do that forty-five minutes outside of Pittsburgh.'"

Broadway is a stand-in for gay, in a way, but it also isn't. Nate really does want to be a Broadway star - badly. He also wants to live in a place where he doesn't get beat up on a regular basis for his perceived homosexuality. The story can be about both things, Federle seems to say. Text and subtext are always intertwined.

Better Nate Than Ever is not without its flaws. It's a bit slow to start, and some of the structural choices (such as the parenthetical flashbacks in one chapter) are questionable. There's a lot of landscape - both inner and outer - to keep track of, and a lot of characters too. For the most part, though, Federle has done an admirable job of keeping it all together.

The verdict? I suspect Nate may be this year's Wonder or Okay for Now. Lots of popular accolades, lots of critical praise from outside the library bubble, a heartwarming message, etc. I think it's better than both of those books, but this is the kind of crowd-pleaser that the committees often seem to snub.

Published in February by Simon & Schuster