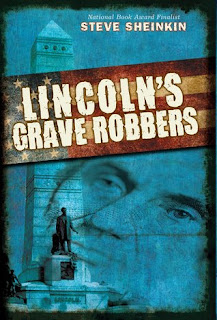 2012 was a really strong year for juvenile nonfiction, and the cream of the crop was Steve Sheinkin's Bomb: The Race to Build - and Steal- the World's Most Dangerous Weapon. It took a Newbery honor, made the Notables list, and won both the Sibert award and the YALSA Award for Excellence in Nonfiction.

All of those awards were well-deserved; it's a magnificent example of literary nonfiction, a symphony of details and plotlines that are all perfectly integrated. It's a book I can easily picture us still discussing in hushed tones in twenty years, and I'm glad it managed to impress so many committees.

This meant that I was really excited to read Sheinkin's newest book, Lincoln's Grave Robbers. The title is a bit lurid, maybe, but it's also accurate -- there actually was a plot to steal Lincoln's corpse, one that made it all the way to the participants having the coffin in their hands before being thwarted. Perhaps because it was, in fact, foiled, it's something of a forgotten incident now, but Sheinkin certainly makes it an interesting one to read about.

However, some of the elements that made Bomb so exceptional don't work as well in Lincoln's Grave Robbers. Bomb blended three separate plots into a unified whole, as seamlessly as a le Carré novel. Lincoln's Grave Robbers, however, falters when it tries to cover information about the 1876 presidential election, which never feels necessary. It also includes both a prologue (about a counterfeiter not otherwise involved in the book) and an epilogue (about medical corpse theft) that are only tangentially related to the main action; the links feel tenuous, and the book probably would have felt more streamlined without these parts.

Sheinkin does do a good job illustrating what a pervasive, seemingly intractable problem counterfeiting was in the mid-1800s, and he successfully shows that a true master engraver who could create plates for printing fake money was so valuable that people would do almost anything -- even plot to steal Lincoln's body and hold it for ransom -- to spring him from jail and get him back to his nefarious work. The prose is smooth and descriptive as well, just as one would expect from a Sheinkin book.

So, taken as a whole, Lincoln's Grave Robbers is perfectly serviceable, and it might even have more of that coveted "child appeal" than Bomb did. But from a literary standpoint, it's not as well constructed or as tightly written, and I think it's a definite, noticeable comedown for Sheinkin. I'd booktalk it and enjoy it, but I just don't think it's good enough to be a real Newbery contender.


Published in January by Scholastic
Posted by Sam Eddington at 2:08 PM