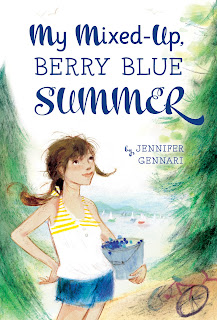 Twelve-year-old June Farrell's life isn't complicated. She swims and boats in Lake Champlain with her friend Luke, helps her mom at the Stillwater Marina Shop, and plans to win this year's pie-baking contest at the Champlain Valley Fair. However, when her mom's girlfriend Eva moves in, June finds herself unwillingly drawn into the controversy over Vermont's new civil union law -- a controversy that divides communities, families, and even June's own mind.

Set in the summer of 2000, when the Vermont law went into effect, My Mixed-Up, Berry Blue Summer tackles a tough issue head-on. June is a sympathetic character, fierce in her love for her mother, uncertain how to deal with some of her neighbors, and pained by the realization that her dreams of having a father are destined to go unfulfilled. Jennifer Gennari used to live in Vermont, and she fills the book with small but beautiful details about the setting -- the rocky cliffs where the best berries grow, the way different weather affects the look of the lake, the noise of the hungry seagulls.

In honesty, those details made me wish the book were longer. At 119 pages, it simply doesn't have time to fully explore all its subplots, or to render its supporting characters entirely three-dimensional. The novel's brevity also means that the events of the last third of the book feel like they pile on top of each other too quickly, giving it an almost soap opera-esque tone that I don't think helps the story.

Those flaws mean that My Mixed-Up, Berry Blue Summer is highly unlikely to show up on the Newbery list. However, it's still a pleasant, engaging read. Even more than that, it's good to see another middle-grade novel from a major publisher that takes on LBGTQ issues and yet isn't solely a heavy-handed polemic. This is Gennari's first novel, and I'm really interested to see what she decides to write next.


Published in May by Houghton Mifflin Books for Children
Posted by Sam Eddington at 10:46 AM