Prepping for the Morris Seminar! 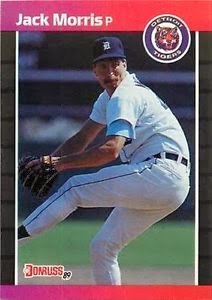 When Rachael attended the Invitational Morris Seminar in 2012, just after we started this blog, she mentioned in her post about it that the name "Morris" always brought to mind images of the world's most finicky cat.

For me, on the other hand, the name brings to mind images of Jack Morris, one of the most feared pitchers in baseball during my childhood, and co-holder of the record for winning World Series titles with the most different franchises (3: the 1984 Detroit Tigers, 1991 Minnesota Twins, and 1992 Toronto Blue Jays). My baseball card collection is in storage right now, but somewhere in that box is his 1989 Donruss card, shown here.

But the Morris Seminar isn't about cats or baseball players -- it's about book evaluation skills, and I'm really excited to be a part of it next week. This year's reading list is fascinating, and I'm curious to see how the discussions about these titles go.

I didn't review this one here, as it doesn't have any words, but it's simultaneously goofy and lovable, and it actually might be my favorite Wiesner that I've read, sacreligious as that may be.

2. Penny and Her Marble, by Kevin Henkes.

3. If You Want to See a Whale, by Julie Fogliano, illustrations by Erin Stead

5. On a Beam of Light, by Jennifer Berne, illustrations by Vladimir Radunsky


Group II (Books for older readers, give or take)

1. Bluffton: My Summers with Buster, by Matt Phelan

I didn't review this one because it's a graphic novel, but my oh my is it a good one. I love Phelan's art style -- I thought he was a perfect fit for The Higher Power of Lucky several years ago, and his work when he's doing the writing is just as good. I also think this book tells an affecting, powerful story, without actually explicitly stating very much.

2. Far Far Away, by Tom McNeal

Rachael reviewed this one for the blog, and declared it to be her favorite children's book of the year. I'm less sold on it, and I think it has some very real structural issues. It's worth noting, however, that I'm not the ideal reader for this novel, and Rachael is basically the perfect reader for it, so my opinion may not be the best guide.

3. P.S. Be Eleven, by Rita Williams-Garcia


Anyway, next week in Philadelphia, I'll have the chance to hear some amazing conversations about these titles. And maybe, a few days later, we'll see some of them show up in the YMAs!

Email ThisBlogThis!Share to TwitterShare to FacebookShare to Pinterest
Labels: Digressions