2014 Contenders: Clementine and the Spring Trip, by Sara Pennypacker 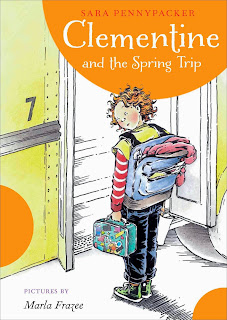 Clementine and the Spring Trip is the sixth book featuring Clementine and her family, marking author Sara Pennypacker's return to the series after last year's stand-alone Summer of the Gypsy Moths. The novel is centered around Clementine's school visit to Plimoth Plantation, which requires our third-grade heroine to ride the olfactory disaster that is Bus Seven, and to deal with the fourth-graders' restrictive rules about making noise while eating.

There's nothing in the Newbery criteria one way or the other about books that are part of a series. In practice, however, series that produce Newbery winners are usually recognized in some way fairly early in the sequence. The two highest-number series books that have ever won the Newbery, The Grey King (1976 award, 4th book in the series) and The High King (1969 award, 5th book in the series), both belonged to series that had won Honors for their second books (The Dark is Rising and The Black Cauldron, respectively). Recent committees haven't shown much interest in sequels in general; since 1985, the only winners that weren't either a stand-alone or the first in a series have been A Year Down Yonder (2001 award) and Criss Cross (2006 award), both of which were the second books in their respective sequences.

Precedents, of course, are made to be broken, and as the disclaimer at the end of so many investment commercials reminds us, past performance is not an indicator of future results. However, considered simply on its own merits, I don't think Clementine and the Spring Trip reaches the level of this year's top contenders. Clementine, of course, is a classic character, and her family is also sharply drawn, but I don't think all the supporting characters are fully three-dimensional. Really, the book that Spring Trip reminds me the most of this year is The Year of Billy Miller. Like that book, Spring Trip excels in its descriptions of its main character and family, as well as home and school. Both novels, however, seem to me to be less crisp beyond those tight circles, in a way that isn't true of The Real Boy or The Center of Everything.

This doesn't mean I didn't really enjoy Clementine and the Spring Trip -- it's a charming, clever read, and I like the way that the ending ties together all of the threads that have been introduced throughout the book. I hope it makes the Notables list this year. I don't think it's quite Newbery material though.


Published in March by Hyperion / Disney
Posted by Sam Eddington at 9:58 AM