The Winner's Circle: The Bronze Bow, by Elizabeth George Speare (1962) 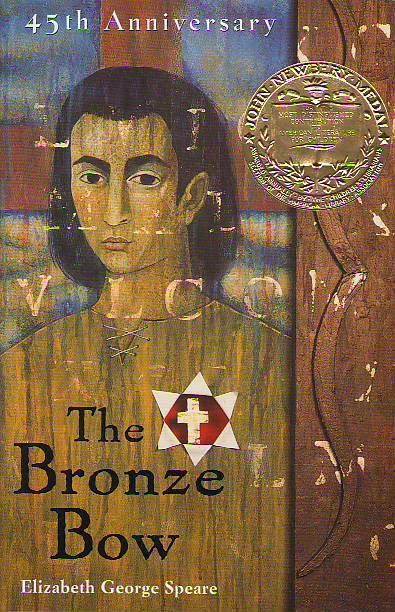 When she reviewed The Witch of Blackbird Pond, Rachael praised the book as a "harbinger of modernity." It's interesting to contrast that novel with The Bronze Bow, Elizabeth George Speare's second Newbery winner, which left a very different impression with me.

The Bronze Bow is a late example of that style of literature that gave us Ben-Hur and The Greatest Story Ever Told. It takes place in a version of the Holy Land that's based on orthodox interpretations of the Gospels, and filtered through 19th- and 20th-century Christianity. If the ending of the book especially feels like a Sunday School tract, that's because that's actually what it is -- Speare was a Sunday School teacher who was inspired to write the book by her class.

It's hard to think of a style of writing that's less in vogue today, or that feels more dated. For what it's worth, Speare does it pretty well -- the prose is as beautiful as you'd expect, and there's more depth to the characters than one might anticipate -- especially the protagonist, Daniel bar Jamin. The plot, however, always feels like it's following a template, and the moral and ethical issues are presented in terms that read as naively black and white to a modern reader. The last scene especially, where Jesus himself visits Daniel's home, was hard for me to read without an involuntary roll of the eyes.

Much like Witch, The Bronze Bow has also been the subject of challenges in recent years. Where people tried (laughably) to claim that Witch promoted the occult, however, the challenges to The Bronze Bow center on its full-throated promotion of Christianity and its denegration of Judaism, and whether those make the book inappropriate for classroom use.

That said, I don't think I'd class this as a mistake award, even as uncomfortable as the book made me, and as forced as the ending felt. You could make the case that a better choice would have been Belling the Tiger, by Mary Stoltz (which did Honor), or The Sneetches and Other Stories, by Dr. Seuss (which got nothing) -- and I think those selections would be easier on modern eyes. But in 1962, I'd guess that it was easier to see Speare's dexterousness with language and her detailed characters and settings (both of which are impressive), and a lot harder to see the book's problems. As much as we try to transcend it, we're all in the time that we're in, and if we notice things the committee in 1962 didn't, that should just encourage us to try to be that much more careful in our own reading now.

Posted by Sam Eddington at 1:55 PM