2015 Contenders: Zane and the Hurricane, by Rodman Philbrick 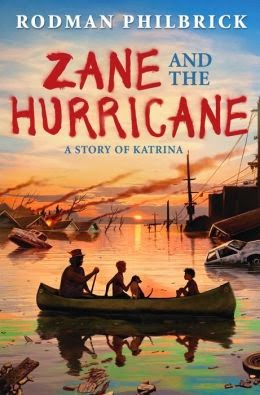 Twelve-year-old Zane Dupree has been sent to visit his great-grandmother in New Orleans. He's never met her before, but it turns out that they get along well, and she is also very kind to Zane's cherished dog, Bandit. However, it's August of 2005, and Hurricane Katrina is about to unleash its full fury on the Gulf Coast. When it does, Zane finds himself struggling to survive in a city that has suddenly become a nightmare.

The descriptions of the surreal, destroyed city are the single best thing about Zane and the Hurricane. The extreme physical discomfort that everyone left in New Orleans is experiencing also comes through very strongly. The book's visceral sense of place is really what propels it forward, and it's very well done indeed.

The plotting, however, is loose at best. The book provides a formidable, unsettling villain in the drug lord Dylan Toomey, but fails to give his plot thread any kind of payoff. The ending of the book in general seemed noticeably weak to me, relying as it does on deus ex machina appearances of secondary characters, who step into a moment of crisis and wrap everything up. I also question whether the epilogue really is necessary to the book's effectiveness.

The main characters aren't particularly well-rounded either. Trudell Manning, renowned session musician and Zane's new friend Malvina's temporary guardian, is probably the best of them, a genuine New Orleans blend of flamboyance and sadness. Zane's narration, however, veers inconsistently from the highly colloquial to the poetic, and Malvina's depth is largely provided by a secret that proves not to be particularly significant.

This is Rodman Philbrick's first children's book since The Mostly True Adventures of Homer P. Figg (2009 publication, 2010 Newbery Honor), and the mere fact that he's got a new book out is cause for celebration. I don't think this one will win the same accolades as the previous one though, although it's early in the year yet.


Publication in February by The Blue Sky Press / Scholastic
Posted by Sam Eddington at 11:54 AM