2015 Contenders: A Less Than Perfect Peace, by Jacqueline Levering Sullivan 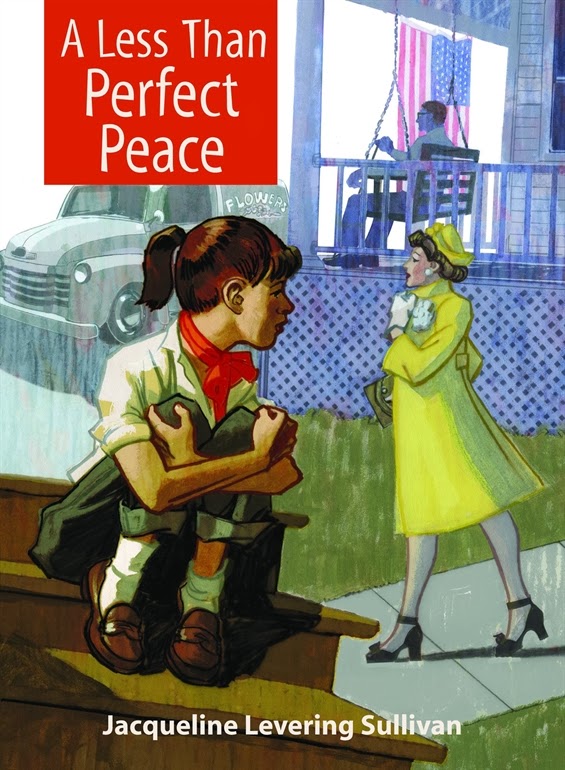 There's no shortage of things going on in Annie Leigh Howard's life. Her family has moved from Seattle to Tacoma; her father, a mostly blind WWII vet, is still struggling to readjust to civilian life, five years after the war's end; her uncle is in love with her art teacher; her new best friend and her first real crush are refugees from Holland; her mother has just opened her own beauty salon (and may be having an affair); and she's trying to develop her own artistic talents through after-school lessons.

That's probably two or three subplots too many for a book of just over 200 pages, and it's almost inevitable that some of them get short shrift. At times, the "show vs. tell" balance skews, as we race over major plot points without getting that much of a chance to let them sink in. The parts with the strange neighbor next door seemed especially rushed to me.

And yet, A Less Than Perfect Peace isn't without its charms. Annie is an interesting character, with both great strengths and great weaknesses. She moves through a setting that's very well presented, full of little details -- the names of programs on the radio, descriptions of advertisements, references to pop culture figures -- that breathe life into the novel.

A Less Than Perfect Peace is the sequel to Annie's War (2009), which I haven't read, but for almost all of this book's duration, I thought it stood alone perfectly well. (A few of the scenes at the end, featuring cameos from the previous novel's characters, probably would work better for readers of the first one.) It's kind of a throwback, in that, although Annie is fourteen, and many of the issues raised are weighty ones, it's definitely a J book rather than a YA one. It might be of interest for the same readers, for instance, who enjoyed last year's Hattie Ever After, a title with similar sensibilities.

And that, I think, is where I end up in my evaluation. I don't think A Less Than Perfect Peace is Newbery material, but it's the kind of book that I can see being beloved by a small but loyal group of fans.


Publication in March by Eerdmans.
Posted by Sam Eddington at 11:38 AM