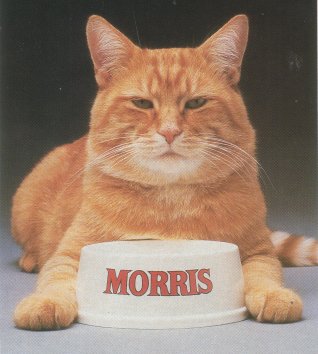 Yes, it's true. For me, the name "Morris" has only one connotation. Suddenly I'm craving tuna. Or, you know, random bits of ground-up, nameless fish.

Ok. Enough with the semi-disgusting cat food metaphors. Since I'm spending the day going over the books I have to read for the seminar, I am making this Morris Seminar Prep Post in lieu of the traditional Youth Media Awards Prediction Post.

Here are my thoughts, in no particular order...

(Bunny creeps me out, though. That description of her running under tables kept making me picture her as some kind of hobbit.)

Also notable: setting. The town, of course, is a character in its own right. Voice/style: slapstick murder mysteries have been done before, but the ratio of wackiness to thoughtfulness (in the midst of all the zany happenings, Jack does quietly come of age) is fairly unique.

Award possibilities? It's a long shot for the Newbery, I think. It would be difficult to build consensus around a book this weird. Maybe an honor?


Okay for Now, by Gary Schmidt

Well, I already told you that I don't love it, and I don't hate it either. There are certainly some distinguished elements. Voice, most notably. Doug's voice is strong and well-defined, and establishes him clearly as an unreliable narrator - lying most often, interestingly, to himself. It's also a multi-layered voice, taking on a new richness and depth as he contemplates the Audubon paintings.

Award possibilities: Newbery, obviously. It's a front-runner, and at the top of many Mock Newbery lists. Not as obvious a choice as When You Reach Me was, though, so the committee could still surprise us.

I love this book, and I'm glad that Betsy Bird does too, or I would start to feel like I'm going crazy. It got a lukewarm reception in the Goodreads Mock Newbery group, and by Heavy Medal, and people really dislike the ending.

Distinguished elements: character. God, Hazel is an amazing heroine. She is a completely believable, flawed ten-year-old girl who's having a really crappy year and who reacts appropriately. That's what makes her heroic deeds amazing: she's just an ordinary girl. I've seen people argue that Harry Potter would be better if it were about Hermione - if the protagonist were not "chosen," but had to earn hero status through bravery and intelligence. Breadcrumbs should please those people.

Setting (both icy Minnesota and icy woods) and the way the structure of the book echoes the theme (the fragmented nature of the woods narrative is on purpose, y'all!) are also stellar.

Award possibilities: major long shot for the Newbery. Too sad and structurally weird to rally around.

I think everyone agrees that this is one of the best books of the year, but no one knows what to do with it. Let's pretend we can consider both words and pictures at the same time, though.

Distinguished elements: character. Ben and Rose, obviously, and it's so interesting to see the way he develops each of their characters in parallel - one through words, the other through pictures. Also impressive is how Ben's mom - deceased throughout the book - is a real, fully present character. And Jamie (and his relationship with Ben).

Setting: who among us did not read From the Mixed-Up Files of Mrs. Basil E. Frankweiler as children and want to run away to a museum? Selznick takes that trope to a new museum and makes it entirely his own. And Minnesota... and the diorama(s)...

I'll stop now, but damn, Selznick! Why you gotta be so awesome?

Award possibilities: Newbery and Caldecott long shots, but you hate to restrict your appreciation to either words or pictures, you know?


Next up: Morris Part 2: The Picture Books.