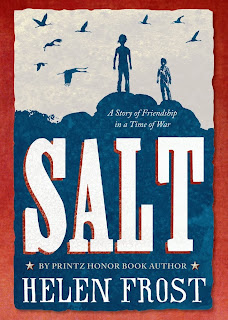 Whenever I pick up a verse novel, the first thing that goes through my head is the question, "why this story in this format?" That is, what is it about this story or these characters that makes the author feel like verse would work better than prose to communicate the narrative?

Sometimes, there's a good answer. In The Wild Book, the narrator has tried writing in poetry as a way to help her dyslexia. In The One and Only Ivan (which, while not a full-on verse novel, has certain verse novel elements), the clipped, understated narration is meant to help show what it's like inside a gorilla's head.

More often, however, I can't find an answer that satisfies me. And that was probably my biggest complaint about Salt -- that I was never able to answer that question to my satisfaction. True, it allows for the book to switch quickly between its protagonists, but that's something that can be done in pure prose form too, and I think it might have benefited from that approach.

I also felt like the brief nature of all the scenes meant that the characterization wasn't particularly deep. We get a fairly good feel for James and Anikwa, the narrators, but the secondary characters end up painted in very broad strokes. Even with James and Anikwa, I felt like the characterization didn't have enough nuance for their conflict halfway through the book to really feel natural.

A lot of the language is beautiful -- anyone who loved Step Gently Out last year knows that Helen Frost is highly skilled with imagery. I'm not sure I felt like all the line breaks were purposeful enough, however, and I don't think that giving all of Anikwa's poems a specific shape on the page (one that's sort of like three stacked balls) helped with that challenge.

I did enjoy the setting -- the war of 1812 isn't a popular choice for children's books, and the portion of the conflict that didn't take place around the Chesapeake Bay even less so. I did feel like I'd spent some time in an interesting place after I'd finished the book.

The setting, however, was the only facet of the book that I felt was truly distinguished. That might be enough to get Salt on the notables list, but I'd be very surprised if it showed up in the Newbery announcement.


Published in July by Farrar Straus Giroux
Posted by Sam Eddington at 1:46 PM