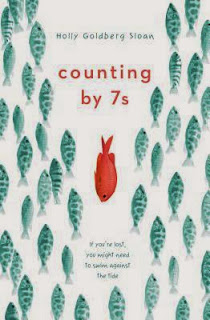 Counting by 7s is the story of Willow Chance, a precocious 12-year-old whose parents are killed in an automobile accident. It details the aftermath of this tragedy, and Willow's attempts to build a new life and a new home with a cast of other people who don't quite fit in.

The book is getting a fair amount of awards buzz, and a lot of reviewers have really positive things to say about it. Having finished it, however, I find myself unpersuaded.

The biggest problem I had is with Willow herself. I didn't believe in her for a second -- she reads like the kind of genius you see on a TV show rather than one you might actually encounter in real life. She effortlessly learns and recalls information about gardening, zoology, epidemiology, dermatology, beekeeping, astrophysics, computer hardware, legal agreements, spatial design, astronomy, network hacking, modernist poetry, and multiple foreign languages (Spanish, Latin, Vietnamese), to the point that even Marilyn Vos Savant might be hard-pressed to keep up. She aces a test that apparently not a single other child in the state of California has gotten perfect, and yet she hasn't so much as skipped a grade. As middle school prodigies go, she's slightly less realistic than Susan and Mary Test, and significantly more problematic than Early Auden, whom I've already complained about at length.

That might work if it were played for laughs, or if it were in some kind of larger-than-life tall tale, but Counting by 7s is ostensibly contemporary fiction with no fantastic elements. Willow's character kept jarring me out of that world with her impossibility.

This is even more true because the facts in the book have moments where they veer away from the truth significantly. Willow has a story she tells (and references repeatedly) about the flock of green-rumped parrots that lived by her house. However, the book is set in Bakersfield, California, and according to the Official California Bird Records, there has never been a recorded sighting of a green-rumped parrot (or parrotlet, which is what it's usually called) in California, much less a flock of them moving into someone's backyard. If she's an expert in zoology at the level at which she is presented -- and, especially since the book shifts constantly between first and third person narration, there's no reason to view Willow as an unreliable narrator -- that seems like the sort of mistake she wouldn't make.

Counting by 7s has a heartwarming plot, and the sentence-level writing is quite good, if presented in a somewhat stilted cadence. But, in the end, I'm not convinced about this one at all.


Published in August by Dial Books for Young Readers
Posted by Sam Eddington at 3:09 PM