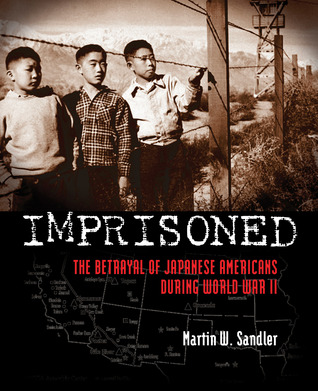 This is a solid book about a topic that's seldom given the attention it deserves: the imprisonment of Japanese-Americans during World War II. If I were reviewing it in detail, I would pay close attention to the way it's organized, indexed, etc.

I am not reviewing it in detail. I have been out of the office (traveling, dealing with my sickness, and then dealing with my kid's sickness) for a week and a half. I have Sam's permission to write a Short Grouchy Review (patent pending) of this one. In fact, I am going to deploy bullet points.

I'm giving it four stars on Goodreads, but for someone with my reading habits (seeking out the best children's books published in any given year), there is a lot of room within that fourth star. This is a low four, compared to the mid-to-high star I gave Courage Has No Color.

Neither of them are going to win the Newbery, and, as Sam mentioned today, I'm kind of hoping that the Sibert goes to a nonfiction picture book this year. Brave Girl and A Splash of Red are both great choices, Sam loved On a Beam of Light, and I haven't been able to get my hands on The Mad Potter yet, but I'm a big fan of any Greenberg/Jordan collaboration.

Published in May by Walker Childrens
Posted by Rachael Stein at 1:36 PM