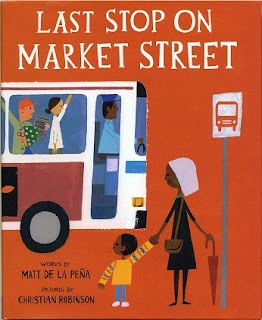 As I read it again in preparation for this review, I found a lot to admire in the text. The interplay between CJ, the child protagonist, and his nana is beautifully written; I loved the way that nana challenges CJ's ways of looking at the world without coming across as argumentative or dismissive. The detailed urban setting and the interesting secondary characters (especially during the bus ride) are also points in the book's favor.

I still count myself among the unconverted to Last Stop on Market Street's Newbery win, however. It's a picture book, and as in most picture books, the interplay between the text and the illustrations is key. In at least two places, the text is something less than comprehensible without recourse to the illustrations; since the Newbery criteria clearly state that illustrations can only be considered if they "detract from the text," I continue to have questions about whether or not it makes sense to give the award to a book in which the text doesn't stand alone. It feels to me like stretching the intended purpose of the Newbery past the breaking point.

This is all only my opinion, and I should be upfront regarding how much of a traditionalist I am on this subject. Although I'm a fan of boundary-breaking books, I prefer to keep the Newbery as an award solely for merit that inheres in the text. I didn't like Flora & Ulysses winning the Newbery in 2014 because I thought too much of the book depended on the illustrations; I didn't like El Deafo being an Honor book in 2015 because naming a graphic novel didn't feel in keeping with the spirit of the award to me; and I still don't like Last Stop on Market Street as the 2016 winner. (For the record, I didn't like Bob Dylan's Nobel Prize win this year either, and I love me some Dylan.)

It's pretty clear that recent Newbery committees have been willing to push the boundaries of the Newbery, and I know more people who agree with their decisions than agree with me and my stick-in-the-mud complaints. Your personal mileage may vary. I would have rather seen the award go to some of the more "traditional" contenders (Circus Mirandus; The War That Saved My Life; Moonpenny Island; Echo). But if one considers Last Stop on Market Street as a whole, it's certainly a very fine picture book, and I'm glad that it's almost certainly going to get a wider readership.
Posted by Sam Eddington at 1:40 PM