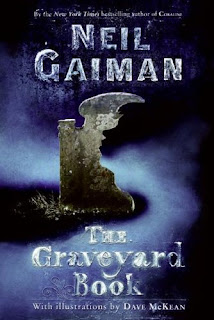 Plenty of Newbery-winning authors have had thriving careers outside the confines of children's literature. Will James and Walter Edmonds were bestselling adult authors; Joseph Krumgold was an MGM scriptwriter, as well as one of the earliest filmmakers to work in the then-new nation of Israel; Laura Adams Armer and Robert Lawson were both award-winning visual artists; Esther Forbes won the 1943 Pulitzer Prize for History; Sid Fleischman was a professional magician; Maia Wojciechowska was, among many other things, a professional tennis player and instructor.

However, you can make a good case that Neil Gaiman is the most famous person ever to take home the Medal. As the author of Sandman and American Gods; winner of the Hugo, the Nebula, the Eisner, the Bram Stoker Award, and the (UK) National Book Award; scriptwriter for film (Beowulf, MirrorMask), TV (Doctor Who, Babylon 5), and radio (Good Omens); occasional voice actor (The Simpsons, Jay and Silent Bob's Super Groovy Cartoon Movie); and advocate for intellectual freedom and refugee issues, he's a cultural figure recognized far beyond the children's literature world.

Although Gaiman's interests are obviously wide-ranging, he's put out a consistent stream of children's books in and around his other projects. (I count at least 15 titles aimed primarily at children in his bewilderingly long bibliography.) He's been eligible for the Newbery since he moved to the United States in 1992, but The Graveyard Book, which took home the 2009 Medal, remains the only time that the Newbery committee has chosen to recognize his work.

The Graveyard Book follows the childhood of Nobody "Bod" Owens, a boy who, following his family's murder, is adopted by the spirits who occupy the local graveyard. The structure of the novel is largely episodic, although it's always leading up to the final confrontation between Bod and the shadowy man and organization who killed his family.

Readers familiar with Gaiman's other work will recognize the themes that so often occupy him: a group of people who protect human society, but can never take part in it; the notion that there are things so traumatic that it would be a great mercy to be able to forget them; the sense that something enormous is happening just outside of the field of human vision. As I read it now, The Graveyard Book felt to me almost like a dry run for Gaiman's 2013 adult novel, The Ocean at the End of the Lane, which follows these threads into a darkness beyond what would be explorable in a children's book. (Interestingly, Gaiman has confirmed that the two books take place within the same universe; Liza Hempstock, the ghostly witch who befriends Bod, is related in some way to Lettie Hempstock, the heroine of Ocean.)

On a personal level, I've always admired Gaiman's work more than I've liked it; his obsessions don't match mine particularly well, and his meticulous turns of phrase sometimes feel to me too carefully manicured. Despite that, however, I recognize that he's a magnificently talented craftsman, and that his concerns do resonate with a great many readers. The Graveyard Book is a marvel of writing, and remains well-loved. The committee had an embarrassment of riches to consider for the 2009 Newbery -- in nearly any other year, Savvy, by Ingrid Law or After Tupac and D Foster, by Jacqueline Woodson would have been prohibitive favorites for the award, and of course, Suzanne Collins' The Hunger Games (which, it could be argued, might have scraped the top of the Newbery age strictures) would become a worldwide cultural phenomenon. But it's almost impossible to fault their choice: The Graveyard Book seems well on its way to becoming a classic.
Posted by Sam Eddington at 12:06 PM