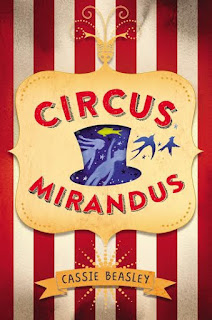 The Phantom Tollbooth. The Little Prince. Breadcrumbs. The House with a Clock in its Walls. Circus Mirandus.

Yes, that's a bold claim to make about Circus Mirandus, a debut novel that's hardly been out for a month, but I believe that, if we come back to this discussion in twenty years, it's a claim that will have been vindicated. There aren't many recent children's books that have made this kind of first impression on me, and I actually sat in the car after work, just so that I could finish the last five pages without having to wait another day.

So begins the adventure. It would be criminal to reveal much more of the plot, but it's a grand one that takes Micah to the heights of ecstasy and the depths of despair. Along the way, he meets a host of memorable characters -- his newfound best friend, Jenny Mendoza; Chintzy the parrot; the mysterious proprietor of the circus, Mirandus Head; and many, many more. All of them felt real and solid to me, and even the worst of them turn out to have motivations for their unpleasantness.

The prose is captivating, and the book is willing to look into some very bleak places. The scene that includes the final performance of the Amazing Amazonian Bird Woman, in particular, is one of the most devastating passages I've read in a children's novel. And yet, if all of the characters don't achieve redemption, the book still manages to end on a defiantly upbeat note.

Circus Mirandus has received a tremendous amount of hype -- Dial/Penguin must have spent the GDP of a small country on the book's promotion, and the movie rights have already been sold. But for once, the hype is entirely deserved. This one's a winner, folks.


Published in June by Dial/Penguin
Posted by Sam Eddington at 1:47 PM