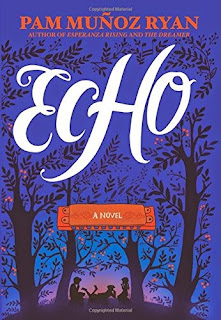 Echo is proof that Pam Muñoz Ryan loves us and wants us to be happy.

It is a story about the divine and mysterious power of the harmonica.

Otto is lost in the woods. All he has with him is a book and a mouth harp he bought from gypsies that morning. In the dark, he is comforted by three women, Eins, Zwei, and Drei, princesses, lost themselves, kept in the forest by a witch. They cannot leave, but their spirits can be freed by a woodwind. Otto offers up his small instrument…

“But it’s only a harmonica”
“Oh it is much more!” said Eins. “When you play it, you breathe in and out, just as you would to keep your body alive. Have you ever considered that one person might play the mouth harp and pass along her strength and vision and knowledge?”
“So that the next musician who plays it might feel the same?” said Zwei. “It is true. When play you will see and find your way. You will have the fortitude to carry on.”
Drei nodded. “And you will be forever joined to us, to all who have played the harp, and to all who will play it, by the silken thread of destiny.”
The three lost princesses play Otto’s harmonica, and then he plays it, wandering through the pines, until somebody hears him and leads him back home. When he relays his tale, his parents wonder if he’s “affected.” They tell him he must have imagined Eins, Zwei, and Drei. He must have even imagined the gypsies who sold him a harmonica, as there have been none in the village lately…
Suddenly the novel completely shifts. New setting, new characters, new plot. You’re taken aback. Is the author really doing this? Totally dropping a story and expecting us to become invested in a new one? But that’s exactly what happens…

Friedrich is a young man living in Germany in 1933. He and his father and uncle work at the Hohner harmonica factory. They are a happy family of musicians. Friedrich is very talented, with hopes he can attend a conservatory, and one day conduct a symphony. But times are frightening. The Nazi party is beginning to take power. Everyone is concerned with being a loyal citizen. Everywhere they’re discussing the purity of the German race. Even Friedrich’s sister is active in the Hitler youth, and encourages her father to discontinue his friendship with their Jewish neighbor. He doesn’t heed her advice and one day Friedrich comes home to find all of his family’s possessions upturned by the Gestapo, and his father on his way to a work camp to be re-educated. The only thing bringing him any joy is a harmonica he found in a disused part of the factory, emblazoned with an “M,” that sounds more harmonious than any instrument he’s ever played…

The novel shifts again. New setting, new characters, new plot. But what about Friedrich? Can he and his uncle hatch a plan to have his father released from the work camp? Will his sister come to her senses and help them? Will he make it into a conservatory and become a conductor? (Come to think about it, we never found out what became of Otto!) Forget about all that for now.

Mike and his little brother Frankie are in a Pennsylvania orphanage in 1935. Mike is worried. He’s heard a rumor that the younger children at the orphanage will all soon be transferred to a state run orphanage. Not only will Mike and Frankie be separated, and they’ve never been separated, but the conditions at the state home are awful, kids worked to the bone, dying of diseases. Miraculously, two men arrive at the orphanage. They represent an heiress who wishes to adopt a child. A child who is musically inclined. And it just so happens the only two boys who can play the old piano at the orphanage are Mike and Frankie. Oh, and she wants to adopt them that very day. The brothers are whisked away to the stately home of Eunice Dow Sturbridge. But something’s not quite right. “Aunt Eunie” does not receive her wards warmly at all. In fact she seems angered by their presence despite their many attempts to win her over. Mike discovers she didn’t really want to adopt, rather it was a stipulation of her father’s will, and that she had requested a young girl, not two boys, particularly an older boy. Mike wonders if he leaves, could she learn to love Frankie at least? He learns of a traveling harmonica orchestra that are auditioning for new players. If he can join Hoxie’s Harmonica Wizards, he’d have a place to go, and Frankie could hopefully get some attention from their new mother. And he’s procured just the right instrument, a remarkable harmonica, emblazoned with an “M,” to practice on.

The novel shifts again. New setting, new characters, new plot. But what about Mike and Frankie? Will Aunt Eunie ever open her heart to them? Will Mike earn a spot in the orchestra? Wait, is that Friedrich’s harmonica? Hey, whatever happened to Friedrich? (And whatever happened to Otto?) Forget about all that for now.

Ivy Lopez is the daughter of migrant farm workers in California in 1942. Of all her classmates, she has been chosen to perform a harmonica solo on the radio and she’s so excited. It’s not to be however, because her family must abruptly move. Her father has taken a job overseeing the farm of the Yamamoto family, who’ve been unfortunately detained in a Japanese Internment camp. The Lopez family will work their land, and watch over their home, until they’re allowed to return, and if they like how they’ve kept the place, they will keep her father on as a hired hand. Their families are now linked in a way. Ivy is extremely disappointed that because her family is Latino, she must attend a separate school, an annex of the school her more privileged peers attend. Ivy plays her harmonica, a beautiful thing, emblazoned with an “M,” the music it makes transcending the injustice in the world, and hopes to rise above all the racial prejudice she’s confronted with.

The novel shifts again. But we weren’t finished with Ivy! What happens to her? How did she get Mike’s harmonica? And where did he end up? And, seriously now, did Friedrich even survive Nazi Germany? (And Otto. Dammit. Why did you even tell us about Otto?)

In the final 40 pages, Pam Muñoz Ryan beautifully ties EVERYTHING up, in a gorgeous bow, her gift to her readers, who have hung on this long, who have emotionally invested in not one, but four separate stories. We who have kept turning pages, perhaps first out of duty, but then with delight, get to figuratively open this present and see what’s become of Friedrich, Mike, Ivy, even Otto, and their families, and witness how artfully their lives were intertwined by the magic of one harmonica.

This book, in my humble opinion, is nothing short of a masterpiece. It’s a hell of a way to kick off 2015 Newbery buzz. But it’s so much more. This is a book for people of all ages to be entranced by. It is enchanting. It is wonderful. It’s honestly one of the greatest things I’ve read in a really long time (and I read a lot, people). I hope that you’ll give it a try, not just because it could win a medal, but because it is a thing to behold, a force to be reckoned with, an emotional rollercoaster that leaves you wanting nothing at the end, except maybe to hold the book to your chest, and give it a big hug.

Published in February by Scholastic