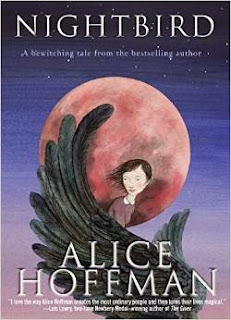 I've never read any of Alice Hoffman's YA or adult work, but every sentence of Nightbird made me understand why she's so highly regarded. The imagery is brilliant, and Hoffman's depictions of a little New England town that time passed by are both evocative and spot-on. It reminded me in some ways of reading Hawthorne, although Hoffman's tone is much more cheerful.

The problems come when trying to evaluate the book as a larger whole. Although the main character, Twig, comes through fairly clearly, I felt almost like the secondary characters -- Twig's friend Julia, Julia's sister Agnes, Twig's brother James (the quasi-title character), Twig's mother -- were placeholders, waiting to be fleshed out in the final version. The plot also seemed awfully convenient, even before the impossibly upbeat ending.

Nightbird is part of a grand tradition, where the younger generation repairs the mistakes of their forebears in a way that's at the least quasi-mystical, and often fully magical. From The Secret Garden (1911) all the way to Saving Lucas Biggs (2014), this trope has proved to be fertile ground for children's novels -- including many genuine classics.

However, the flip side of using well-worn themes is that an author runs the risk of failing to really add anything new, and I think that may be the case here in Nightbird. The whole thing felt a bit tired to me, rather than archetypally powerful, and I'm not sure the Newbery committee will feel differently enough to give Nightbird the medal.

On the other hand, the prose is so lovely that I found myself hoping that Alice Hoffman will write some more middle-grade novels. Even if this one doesn't fully work, I think that what it does well shows that Hoffman is an author whose voice is a great addition to the middle-grade world, and I hope she gifts us with another book soon.


Published in March by Wendy Lamb Books
Posted by Sam Eddington at 11:52 AM