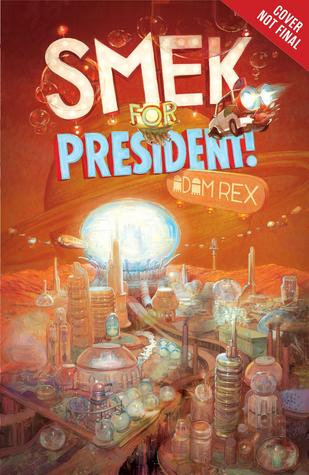 If I don't review this book RIGHT NOW, Sam is going to kill me. I actually read it in ARC form last year, but then the publication date was pushed back in order to coincide with the movie of the first book, and then I wanted to wait until I listened to the audiobook, and then I still didn't write my review because I'm lazy, etc., etc.... Suffice it to say that it would be prudent, as regards my marriage, to go ahead and write this thing.

So, Tip and J. Lo are back! It's been a year or so since they banished the Gorg, saved the planet, and gently encouraged the Boov (except J. Lo) to take up residence elsewhere. Things are quiet - too quiet for Tip, who's used to tooling around the country in her flying car with no parental supervision. In a spectacularly boneheaded move on both their parts, Tip and J. Lo take off in Slushious to pay an impromptu visit to New Boovworld. Their goal is to restore J. Lo's tarnished reputation, but when they arrive, of course, nothing goes according to plan.

Smek for President is a more thoughtful, introspective book than The True Meaning of Smekday, which feels like a strange thing to say about a novel that prominently features a form of transportation known as a "hoverbutt." In the hands of a skilled author, though, the ridiculous can exist comfortably alongside the sincere, and Rex does an excellent job of weaving genuine emotion into the fabric of his surreal humor.

Tip spends long stretches of the novel alone, working through her feelings in conversation with the (imaginary) ghost of Chief Shouting Bear. Her voice is slightly different than it was in the first book - the voice of a girl on the cusp of adolescence, seething with resentment, guilt, and confusion, and unsure of what kind of person she wants to be.

J. Lo's plot arc is somewhat grim as well - he spends a third of the book in prison - but still filled with his usual Boovish nonsense His unlikely friendship with Tip is as poignant and authentic as ever, though, even as they bicker and snipe at one another like true siblings.

Of course, this all takes place in the context of the first-ever election for High Boov, and Rex's talent for wicked-smart political satire is on full display as he depicts the rituals of Boovish politics and the general goings-on of New Boovworld.

It's a delightful book, and if you enjoyed The True Meaning of Smekday, I doubt that I have to tell you to run out and get your copy ASAP. It's not going to win the Newbery, though. In addition to being a sequel, it's too funny and too weird. I do hope that the release of the movie, Home, will inspire more children to check it out.

I should also mention how absolutely glorious the audiobook is - Bahni Turpin's narration may be the best comedic audiobook performance I've ever heard. Among children's lit audiophiles, it's legendary. Go have a listen!

Published in February by Disney-Hyperion
Posted by Rachael Stein at 2:19 PM