In 2017 we will continue to focus on past Newbery winners. We will occasionally blog about current contenders, as the fancy strikes us, but we'll mainly stick to our travels in ye olde...

And today we go back to 1968. 1968 was a historic year. Apollo 8 orbited the moon, MLK and RFK were assassinated, Star Trek gave us the first interracial kiss on television, and, of course, From the Mixed-Up Files of Mrs. Basil E. Frankweiler by E. L. Konigsburg won the Newbery Medal (a significant win, as Konigsburg was also a runner up that year for Jennifer, Hecate, Macbeth, William McKinley, and Me, Elizabeth, the only double honor in Newbery history.) 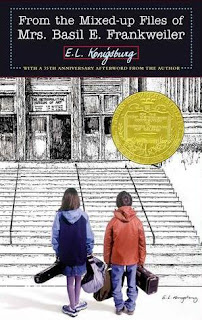 It's the story of twelve year old Claudia Kincaid. Seemingly disenfranchised by an unjust lack of respect/affection/attention in her family, she decides to run away from home. She chooses to recruit her nine year old brother Jamie to accompany her because they connect intellectually in a way she doesn't connect with her other siblings, and because Jamie is independently wealthy due to the fact he regularly hustles his classmates at cards, and they'll need cash for the plan to succeed. The plan, by the way, is to run away to the Metropolitan Museum of Art in nearby New York City, because if you're going to run away why not do it to the home of many of the most sophisticated works of art in the world? While living in the museum Claudia becomes fascinated by a sculpture of an angel that the Met acquired for a shockingly low price considering it may be the work of famous renaissance artist Michelangelo. Claudia makes it her mission to confirm the sculpture is by Michelangelo, a quest which eventually leads her and Jamie to the Connecticut home of Mrs. Basil E. Frankweiler, the eccentric patron of the arts who sold the angel to the Met, and her mixed-up files, an archive, organized in no discernible order other than what makes sense to Mrs. Frankweiler, of secrets, including the secrets of the angel: who sculpted it, how it came to be in her possession, and why she sold it. 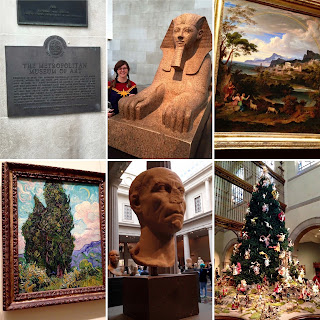 This book was one of my favorites when I was a child, because I was enchanted by the ideas of 1. running away to a museum, and 2. having an archive in my home when I grew up. As an adult I still love museums, and imagining where I would sleep if I ran away to one. A few years ago I had the pleasure to visit the Met, and there were many fantastic places to spend the night if one were so inclined! I also have not one but two libraries in my home, and I live in a very narrow townhouse (a homeslice, if you will) so that's really saying something about living your dreams. I was excited, but anxious to re-read From the Mixed-Up Files as an adult. Would I find it as enchanting as I did when I was a child? The answer is yes, perhaps even more so.

From the Mixed-Up Files is a treat. It's a story that appeals to children. Children love stories about running away from home. It is known. It is exciting to think about what you would do and how you would survive without the care and supervision of your parent or guardian. It is particularly exciting to read about it in a book, and live vicariously through the characters, because actually running away from home is scary and dangerous. Claudia and Jamie, thoughtful and resourceful children, are likable, relatable characters. The narrative style - the book is told from the perspective of Mrs. Frankweiler who is writing to her lawyer, Saxonberg - lends the story an inclusive, conspiratorial tone, which is fun and mysterious. But its greatest strength lies in what the book is really about: the desire all people have to feel special.

It is revealed that Claudia felt compelled to run away from home, to live in a museum, to discover the truth about the angel sculpture, because she was missing something in her life. She felt ordinary, and she wanted to feel special instead. She wanted to have a secret, to keep safe inside her, to comfort her in the assurance she was extraordinary. And it is revealed that Mrs. Frankweiler, though an accomplished, if odd, person, is also missing something. She never had grandchildren despite secretly wanting them. At the end of the novel, both of them get what they need: Claudia learns the secrets of the angel, to keep as long as she likes, and the children adopt Mrs. Frankweiler as an unofficial grandmother, with plans to continually visit her. I thought the book was perhaps making a statement about what it was like to be a woman in 1960's America, feeling wrong or uncomfortable just being yourself, to always want something more, whether or not it's attainable, but the more I think about it, the more I feel that idea, that sensation, is universal and timeless.

From the Mixed-Up Files works as a think piece and a delightful piece of literature for children, making it, in my opinion, a modern classic. I think it truly earned its Newbery Medal, as well as its place in many people's hearts as a childhood favorite. It belongs on the shelves of any respectable library collection for children, and hopefully people will continue to discover and cherish it well into the future.
Posted by T at 2:00 PM