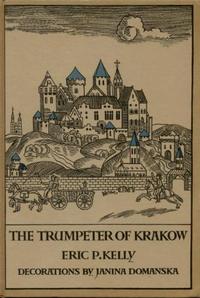 Recently, we opened a Little Free Library in the bus station with which we share a building. As I was helping to stock it, I saw a copy of The Trumpeter of Krakow in the stack of books, and I figured I'd give it a read before sending it on its Little Free way.

After Rachael's review, I wasn't expecting much from this one. Indeed, I can agree with most of her points. The characters, without exception, are two-dimensional at best. The descriptions of clothing are detailed to the point of absurdity, and I'd add that the descriptions of streets and buildings are as well. When the staircase up to the alchemist's loft was destroyed by an explosion halfway through the book, I was ecstatic, because it meant I wasn't going to have to read any more about how creaky and rickety it looked. This is a 50-page book that's padded out to 200 with endlessly detailed descriptive passages, like a 15th-century Polish version of The House of the Seven Gables.

That might not even be that bad of a thing, because the plot itself is unexciting at best. I never felt invested in the fate of the Great Tarnov Crystal, and even in the life-or-death moments, I didn't feel like much was at stake. This is the sort of book where the main characters are more or less bulletproof, and given that they don't undergo any change or development as the novel progresses, there's not much to emotionally invest in. The weirdly passive prose also undercuts any sense of suspense.

Really, the thing I enjoyed most about Trumpeter was the historical information. Jan Kanty isn't much of a character within the pages, but was a fascinating historical figure. The same goes for King Kazimir Jagiello. I did enjoy reading about the University of Krakow, and about the fortress-palace at the heart of the lively city of Krakow itself.

The best book eligible for the 1929 Newbery was, as Rachael mentioned, Millions of Cats, which did Honor. That said, as these early winners go, The Trumpeter of Krakow really isn't as bad as I perhaps make it sound. It has a plot, which puts it above the sludgy meanderings of Smoky, the Cowhorse or Waterless Mountain, and it isn't treacly glurge like The Cat Who Went to Heaven. It's more like The Dark Frigate -- a book whose praises I'd decline to sing, but which points the way to better things for American children's lit. It's a straight line from Trumpeter to, say, Crispin: The Cross of Lead, and any number of other books featuring mystery and adventure in the far-off past.